For years Jackie Chan, Sammo Hung and Yuen Biao have dazzled us with onscreen stunt work and fantastic fight choreography, and after starring early on in quite a few wildly successful films together, they decided to go their separate ways, but before doing that they wanted to tackle one last film together, and bring out every actor, stuntman, and Peking Opera School buddy they’ve ever worked with to go out on a high note.

What a note they hit!

Jackie Chan plays, well, Jackie Lung, a successful lawyer who also seems to have gotten a degree in douchbaggery, as he’s a womanizing asshat who works for Hua Hsein-Wu, who owns a local factory that is being sued by Miss Yip, a strong woman who owns a fishery nearby, whose accusation is that the waste runoff from the factory is hurting her business. Jackie tries to warm up to her best friend and confidant Nancy, who isn’t smitten by Jackie’s charms at first. To ensure his client wins the case, Jackie hires his buddy Luke (Hung) to spy on Miss Yip, but doesn’t tell Luke that he’s also hired his two-fries-short-of-a-happy-meal pal Timothy (Biao) to plant a bug in Miss Yip’s house.  Jackie’s plans fall astray as Luke falls in love with Miss Yip and mistakes Timothy for a burglar, and they both get into a scuffle, and before long Jackie must referree both of his friends as well as try to win the heart of Nancy, all the while trying figure out what the men he’s working for are really up to.

Good lord, where to start. Rarely in the Halls of AssKickery has there been a film like this. Jackie Chan is as great as always, and here he really cuts loose with fantastic moves especially during the boat attack and the final fight in the factory, first with the thugs and then a fantastic rematch with Benny “ The Jet” Urquidez (Wheels on Meals). Sammo Hung is his funny yet serious self as Luke, and gets some fights but not that many, but with so much butt-kicking goodness I didn’t mind. Yuen Biao has some absolutely jaw-dropping scenes, first with his acrobatics throughout the entire film, and then the factory finale where he takes on the always great Billy Chow. Yuen Wah is hilarious as the cigar-chomping baddie, and it’s impressive he can still puff away–even when cartwheeling or somersaulting around. 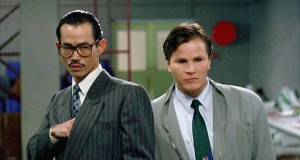 The three-way fights that occur twice in the film involving Jackie, Sammo and Yuen Biao are comedy gold, and really show that they have done this with each other their whole lives, and they actually have. Their movements and timing with each other is classic, and can never be duplicated. That chemistry onscreen is rare, and has to be celebrated whenever we see it. Jackie’s fight with Benny The Jet is the crowning achievement of the film, and these two really know how to move with each other. Benny has the speed and power to give Jackie a hard time, and on-screen it shows. Benny makes a great villain, and really gives Jackie a run for his money. Their fights are brutal, more so than most of Jackie’s onscreen duels.

The story is fluffy and sweet, and exists to make room for the fighting and comedy, but somehow it all works. The three leads are the glue that holds everything together. They all play to their traits at the time: Yuen Biao is usually the crazy one, Sammo the amoral one except when it comes to his friends, and Jackie the good-hearted but womanizing jerk who always does the right thing. The camera work is dynamic for the fights, and it’s pure perfection. The pacing is well done, and each fight gets bigger and more complex. The Factory fight as a whole is an amazing finale of martial arts, filmed by the best the industry had to offer at the time. It rarely gets better than this!

CHOREOGRAPHY: (10) Every fight catered to the strengths of its actors and what they can do, and Sammo used it to the fullest to get every drop of cool that could be had. The Jackie/Urquidez fight isn’t as good as Wheels on Meals, but it’s close. The boat fight is one of Jackie’s best.

STUNTWORK: (10)  Sweet Beejeezus did the stunt men get their asses kicked. Some of the falls and bounces off furniture they took were downright criminal, and the splits Billy Chow had to do? They had better had paid him well for that one. I think that might’ve cost him the ability to have children. Yikes. The stuntmen really brought it for this one, and they really sell every fight scene.

STAR POWER: (10) Everyone was at the top of their game. Damn near every badass on-screen at the time was in this! As a last hurrah for some of the members of the 7 Little Fortunes (Jackie Chan, Sammo Hung, Yuen Biao, Corey Yuen, and Yuen Wah) they chose a damn good way to close out their collaborations!

FINAL GRADE: (10) Dragons Forever is one of the classics of kung-fu films, with stunning fights and slapstick comedy that marked the end of the Jackie Chan/Sammo Hung/Yuen Biao films, but they went out with a bang!