Tribute: The Greatest Henchman Who Ever Lived

Of course, I’m speaking of the great Al Leong:

Remember him now? During the 80’s and 90’s you couldn’t throw a rock blindfolded at an action film-or action TV show for that matter-and NOT strike one that didn’t have Al in it. This guy has made a long and great career out of playing the most underrated guys in films: henchmen. I’m sure during that time period the casting directors of some of the greatest action films of all time had Al’s number on speed dial, and if not, I’m sure it went something like this:

“Dammit, we need something. I mean, It’s cool that Mel Gibson is shooting all these bad guys, but there’s just…just no spice to it. No flavor at all. What do we do?”, says Richard Donner.

“Al Leong isn’t in the film,” says unhappy intern, with a coffee cup in hand that says “World’s Greatest Director” on it, holding it out to Donner, who looks down and promptly takes it.

“Dammit your right! Mel never killed him! That’s what we’re missing! Eureka! What the hell was the casting director thinking? They are sooo fired-and you’ll take their place!”

There are good websites about Al Leong’s filmography such as this one, so I won’t go on a blow by blow of his films and his life, as he is a very private person who doesn’t interview much. I just want to toss out some love to the greatest of Henchmen, and to let all future henchmen know what standards they need to meet.

If henchmen are a salad, then Al Leong was the ranch dressing in every film he did. His look was unmistakable, with the balding yet long hair, and the Fu Manchu moustache he sported in everything he did. Think about the bad guys in Die Hard for a second. Who do you remember outside of Alan Rickman? You remember the asian fellow who grabbed the candy bars right before wounding a bunch of swat team guys! Al Leong, stand up!

He raised the bar for the art of henching to levels so high not even James Bond wanted any part of him, thus the reason why Al never appeared in one. Without Al, who would actions stars fight and kill in a memorable scene? Don’t forget that the primary function of a henchman is to eventually die, and no one dies better than Al! Impalement, gunshot, decapitation, he’s done it all! No, really, he has! See the vid below:

Even Rotten Tomatoes recognized him, and awarded him the lifetime achievement award in henching:

Al even has a book about his life out, The Eight Lives of Al “Ka-bong” Leong , which you can purchase on Amazon here. And, this being a martial arts movie blog, he was given a chance in one movie to really show his stuff, and that he did when he took on Brandon Lee at the end of Rapid Fire:

After entertaining us for so long, here’s to you, Al Leong. Never has there been a greater henchman than you. If the bad guys had 4 more of you, the good guys wouldn’t have stood a chance. 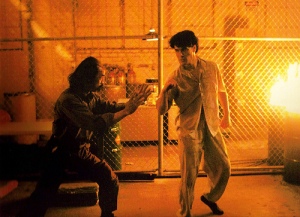