How good has 2015 been so far in the world of independent martial art films? First we get Rope A Dope 2, then Unlucky Stars, and now Jose Montesinos (American Brawler) along with Eric Jacobus (Rope A Dope 1 and 2) and with fight choreography by Dennis Ruel (Unlucky Stars) returns with this ode to the 70’s tough guys!

In this short film we meet three tough guys, who also happen to all wear turtlenecks: Raymundo Bala P.I. (Montesinos), Detective Frank Cox (Jacobus), and Cheegan Jones (Carbonel). As they sit, ruminating over their newfound “sensitivity” and what it means to be a man in the tough environment of the 70’s, we flash back to what they’ve been doing, which is beating up a lot of bad guys in incredibly manly ways. As they discuss these issues it is apparent that this sensitivity does not extend to the gents they are fighting, as they are taken out in increasingly brutal ways. But it’s just another day on the job for these Sensitive Turtleneck Tough Guys…

I must admit that during the first minute I wasn’t sure where things were going, but I quickly understood as both Bala and Cox were about to take on a group of baddies in flashback sequences. After the fighting started I was hooked. The sheer look of the film is 70’s style, from the cars to the clothing and locations to the music. The film captures this perfectly, which is impressive given its small budget. Montesinos and Jacobus do a good job as the tough guys, never revealing their emotions, even as they discuss being sensitive. Carbonel does a great job saying absolutely nothing, which is a feat unto itself as he had to manage a straight face amidst the crazy dialogue he had to listen to. The macrame moment with Carbonel made the film for me.

The only thing I didn’t really like was when the guns came out and started blazing. It’s the only part that showed the low budget nature of the film.

The fights are the standouts here, as Dennis Ruel came off with some great-but-cheesy-but-still-great 70’s style fight choreography (I loved the guy who got his arm broken like 3 times.) and it was performed well, especially the fights with Eric Jacobus, who excels at mixing fighting with comedy. 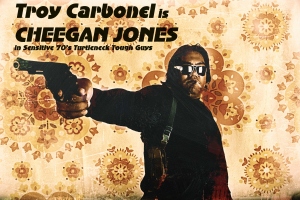 Hopefully we can have these Sensitive Tough Guys return for an encore!