I found I’ve been beating the drums for Jon Foo for quite some time now. He’s got most of the tools to be a martial arts star. He’s great at on screen fighting, has gymnastic prowess, and (at least the ladies tell me) he’s good looking. So what’s missing? I thought it was the parts he chose. Now that I’ve seen his newest film, I think I have a bead on what’s missing, but more on that later.

Bangkok Revenge begins with an attack on the home of a Thai police detective Samat and his wife by unknown assailants. Both the detective and his wife are killed, leaving only their son Manit, a 10 year old boy who is able to unmask one of the killers, and this knowledge buys the boy a bullet in the head, but miraculously he survives the assault and the attempted assassination afterward by a kindly nurse, who takes the boy to a local village to be care for by her uncle, muay thai master Adjan, who teaches to the boy how to fight. One consequence of the bullet that is still lodged in Manit’s head is that he has no emotions whatsoever. Fast forward ten years, and Manit (Foo) goes to the hospital to see the nurse, who is now dying, and she gives him a folder, with all of the information she was able to find out about the death of his family. Manit then goes on a quest to bring his family’s killers to justice, running into a disgraced French detective and a French reporter along the way, and takes on the police, a girl gang, and more in order to get the people who destroyed his life… 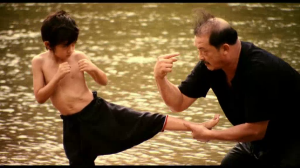 The story is as cookie cutter as it sounds, but as the film is called “Bangkok Revenge” you should know what you’re getting into. There are maddening moments that don’t make a lot of sense, like the nurse who rats out Manit to the police–10 years later. There is also a subplot regarding the French detective that goes no where, and some moments with Clara that make no sense given his condition, and there is another plot regarding the wife of the main bad guy, who runs the girl gang and masquerades as an opera singer, and travels around using the instruments of her orchestra to move drugs. This plot line jumps on a fast boat to nowhere. The film mentions it, shows a bit of it, and then just forgets about it. Jon Foo isn’t bad as Manit, and the story conceit is able to mask his acting deficiencies, and Caroline Ducey isn’t bad either, even though she is playing a stereotypical love interest. The bad guys are forgettable, without a memorable one in the bunch.

As an aside it was good to see Kittichaet Rakwong, who also played a fight promoter in Ong Bak, in this film playing much the same part. 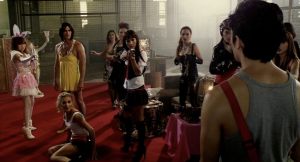 One of the biggest problems this movie has is that it switches from Thai to English often, and Manit can speak English perfectly, and while he says no one would believe the reason why, he never explains the damn reason.  Beyond that this film was made to market to a western audience, thus why most characters speak English, badly in some cases which hurts the acting in the film. I wish everyone simply spoke their languages. Western audiences can deal with it.

The fights have a few moments of coolness, but overall doesn’t have any “wow” factors in regards to the fight choreography. Jon Foo gets to show off some toughness and acrobatic moves, but doesn’t quite reach that level of badassery. Don’t misunderstand, the fights are adequate, but nothing truly amazing. That could be my own bias as I’ve seen so many screen fights, but still. Where’s Panna Rittikrai or Yayan Ruhian when you need them?

I wrote earlier that I had figured out what Foo was missing, and I think this film really shows it. He’s missing a presence. Bruce Lee, Jackie Chan, Jet Li, Iko Uwais and Tony Jaa have a screen presence and personality.  I don’t see that with Jon Foo, at least not yet. Istill think he’s capable. I said much the same thing about Donnie Yen before he did SPL. Jon just needs to figure himself out and get a choreographer or director who can play to his strengths.

A passable film from Jon Foo. No stunt or fight scene really stands out, and the story takes a few nonsensical jumps, but nothing truly outstanding. We’re still left waiting for a great Jon Foo film.