Peter Chan is a celebrated director in Hong Kong, and many were looking forward to this different take on the traditional martial arts film where Peter claimed it would really show the damage the body takes from a martial arts blow. I quaked at this, remembering the horrid special effects used in the Jet Li embarassment Romeo Must Die, but since this was Peter Chan I wanted to give this a fair shot.

The injury effects were well done, but the film had a much bigger problem than that.

Wu Xia (meaning martial arts chivalry) begins in the year 1917 as we see the early day to day life of Liu Jin-xi (Yen) and his wife and two kids. He works for a paper mill, and while doing work happens to be in the store when two bandits come by to rob the place. At first Liu hides away, but eventually jumps in frantically to save the storekeeper. In the ensuing scuffle it appears he defeats both men accidently and is proclaimed a hero of the town, but Detective Baiju (Kaneshiro) doesn’t believe that a man with no training would defeat, even on accident, two dangerous martial artists. He begins to hound Liu, trying to get evidence of who Liu really is, but he has no idea that his inquisitive nature would put the entire town in danger, and place the lives of Liu’s family–and his own–in true jeopardy… 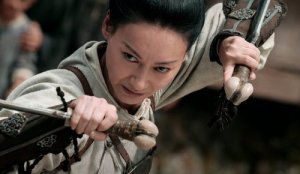 Wu Xia starts off being an interesting detective story, even going CSI with the autopsy and recreation scenes. The perspective of the fight between Liu and the two bandits is shown in two different ways, and it’s actually fascinating to watch, until the writer or Peter Chan got bored and wanted to kick some ass, and at this point the film becomes a standard action film, even though the audience may be forgiven for wondering when and how did the initial tone of the film change. This film couldn’t decide what it wanted to be, and traded an original premise for a safe one, and the transition is jarring to the point that it’s difficult to understand the story. Also, the end of the final fight totally jumps the damn shark for a finish that almost tosses reality out of the window. In another film this scene might be cool, but this film’s story required something more realistic. 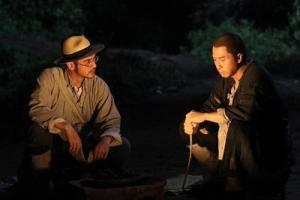 Donnie Yen does a good job playing Liu, going from being a simple farmer to being a stone cold killer, but the real star is Takeshi Kaneshiro as Bai-ju, the relentless detective who doesn’t know when to walk away, literally. He suffers from a terrible memory of something that happened long ago, and also suffers from a poison that is slowly killing him unless he performs acupuncture on himself regularly. That memory causes him to go investigate even further into Liu even though all signs point to the fact that he should stop. Jimmy Wang Yu (Master of the Flying Guillotine) is great as the Master who wants Liu to return to criminal organization he runs, in the hopes of making Liu his heir. He plays a vicious monster here, capable of violence at any moment.

The fights are well done here, and Donnie Yen does his requisite awesome job, but some post production decision-making was odd, such as dropping frames to speeding up the fights, which wasn’t necessary. It took away the smoothness of Yen’s choreography, and maybe it was an artistic choice, but it was still distracting. The fight between Yen and Wang Yu was good, and Peter Chan really ratchets up the tension for this final fight.

CHOREOGRAPHY: (8) Donnie Yen does a great job as always, but the choices made in post takes away from them. Jimmy Wang Yu does a great job to show he’s still The Man. The other stunt performers did a good job keeping up with Donnie Yen’s fight choreography.

STUNTWORK: (7) The rooftop chase scene was fantastic, and the falling stunts were also well done.

STAR POWER: (8) Donnie Yen is still at the top of his game, and Takeshi Kaneshiro is as good as always, and Jimmy Wang Yu–classic.

FINAL GRADE: (8) Wu Xia is a film that had classic written all over it until Peter Chan decided to write something else. A good film that could’ve been great, but will go down as an interesting experiment.

NEXT: Time to tell you the story of Billy Jack!