Directed by Gao Xiaosong
The Peking Opera dances have been a staple of many martial arts films over the years, but usually is part of a set piece or scene. Rarely is it woven as part of the main plot of a film. Prodigal Son is one of the few examples, and My Kingdom will join it as another. Both star Yuen Biao to varying degrees.

My Kingdom begins at the end of the Qing dynasty, and the new Prince Regent is having the Meng families beheaded. Watching all of this is Northern Peking Opera Master Yu (Biao) and his student Yi-Long (Wu), who take note of Er-Kui (Geng) a boy in the Meng family, slightly younger than Yi-Long, who is about to be put to death. Er-Kui sings a song as his sister is being beheaded, and this causes Master Yu to save him. Later, Master Yu is given the Golden Plaque, recognizing him as the greatest of all Opera Masters. During the celebration of the Plaque, Master Yue Jiang-Tian (Rongguang) comes to challenge Master Yu for the plaque. The rules among Opera performers is that if they lose the duel, they are to break their spears and never take the stage again. Master Yu reluctantly duels with Master Yue, and is defeated while trying to save one of the boys. Master Yue takes the Plaque, and the boys vow revenge for their Master, and take it years later, drawing the ire of Master Yue’s protege Madam Xi (Hsu), but little do any of them know that their lives are about to play out not unlike many of the tragic operas they perform… 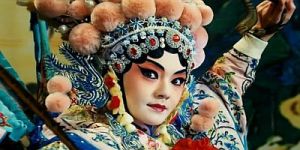 My Kingdom has a story that is simple, and while not exactly predictable, you can get the idea of where things are headed. This story is ultimately about loyalty to one’s family. Every main character, in some way, is acting out of loyalty to their families. Everyone wants revenge, but at the same time they are part of each others’ “families”, which leads to much hand ringing and angst between them as each try to take revenge for their loved ones, which may mean destroying each other in the process. The leads do a good job, with Barbie Hsu being standout as the one enigma. Her character seems simple at first, but as the film goes on she becomes more complicated as she finds her own struggles with revenge. Han Geng does a great job as the most conflicted one of the group, as Er-Kui plans to exact his revenge for the murders of his family by killing all of the sons of the Prince Regent. He is the most sensitive one, and the most dutiful, and always walks around with the weight of the world on his shoulders, and Geng pulls it off nicely. Chun Wu also does a good job as well as Yi-Long, whose motives are probably the most straightforward of anyone in the film. 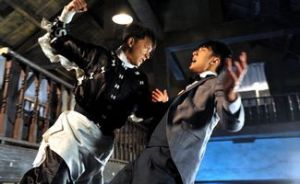 Once again Sammo Hung comes through with great fight choreography. I don’t know how adept any of the actors are in regards to martial arts, but they did a good job. There aren’t many fights, but the two best fights are Yuen Biao versus Yu Rongguang, who show they’ve still got the right stuff, and the fight between Yu Rongguang and the youngsters. The fights are fast-paced and have some really good movements, even if many of them are wire-assisted, but Sammo’s choreography masks some of the more obvious wire harness scenes, as does the excellent cinematography. The one piece of choreography that can’t mask the performer is the fight between Madam Xi and Er-Kui. It’s obvious that a stunt person was used for most of Barbie Hsu’s fights, and when the camera shows its her she is very rigid and, well, just looks uncomfortable in her movements.

Overall My Kingdom is a pretty good film that tells a unique story about the Peking Opera school and the dangers of revenge. It truly is a dish best served cold.

CHOREOGRAPHY: (8) There aren’t many fight scenes in this film, but what’s there is done well. Of course Yuen Biao and Yu Rongguang provide the best fights in the film. The film needed more like that.

STUNT WORK: (7) The stuntmen do a good job subbing in for the actors, which is apparent in some scenes due to the way it’s shot. The Opera performances and battles are well done.

FINAL GRADE: (8) My Kingdom tells a solid story about the Opera warrior’s culture, and the tragedy that unfolds for those who desire the Golden Plaque.