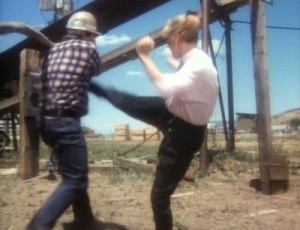 1988 saw two new faces light up martial arts films in the USA—Jean-Claude Van Damme and Steven Seagal. Both were fresh faces after years of basically just Chuck Norris, and dozens of ninja films in the 80’s. Robert Clouse, director of Enter the Dragon, thought it might be time to introduce some English-speaking new blood. Working with Raymond Chow and Golden Harvest, they decided to export Cynthia Rothrock and Richard Norton, both of whom had become stars internationally due to their HK films like Twinkle, Twinkle Lucky Stars, Shanghai Express and Above the Law. Clouse has always tried to recapture the magic of Enter the Dragon, but has never been able to, and doesn’t come close to it here, but does make an entertaining low budget film. (I’ll never be able to quite forgive him for Game of Death, a joke of a film that should never have seen the bloody light of day.)

The film opens as title character China O’Brien (Rothrock), a cop and martial arts instructor is challenged by a student named Termite (A remnant of the 80’s where every black dude was named for everything except a human f***ing being. There wasn’t a black dude named, oh, Bob, for instance. But whatever. The 80’s is full of poor judgments like that. This film capsulized most of them) to a fight to prove that martial arts can work in the real world. He leaves the dojo only to get his ass kicked in the alley right outside. Maybe, just maybe knowing martial arts may have saved him from such an ass-whooping, proving once again how Karma is a bitch.

Anyway, China goes to the designated alley to meet him, only to find dudes there that are NOT his friends. She fights them off in a fun scene that shows how HK fashions of the 80’s doesn’t work so well in the USA, and in the end she shoots one of the gangbangers, who happens to be a kid. She resigns from the police force and returns home, which is a small town in which her father is sheriff, but she soon discovers that things have gone downhill since she left, and the country white dudes she left behind have been replaces by douchy country white dudes with pot bellies who think they can fight and work for organized crime. She does have a friend/boyfriend teacher Matt (Norton) who is also presumably from the same town but strangely has an Australian accent. She is also helped by Dakota, China kicks a little ass here and there until her father is killed, and she decides to run for his office and is challenged by one of Barlow’s men, and after they rig the polls and try to steal ballot boxes it leads to a final fight for control of the town. A really small town. Suffice to say:

If you love seeing small town dudes getting their asses kicked, then this film will be your nirvana. The story is hokey, and the acting sucks, but that kinda adds to the charm of this. Cynthia has to actually portray…warmth and love here, which is not what she had been asked to provide in any of her HK films. She may not have been used to it, and the same goes for Richard Norton, but when it comes time to kick ass, the film does it fairly well. Now there isn’t any fights versus any other good martial artists, but nevertheless it’s fun. The line reading is tone-deaf, but as Robert Clouse was deaf as well (no joke, he actually was), it’s all good, I guess. The fights are well done, and for the most part keeps up with the Hong Kong style of choreography and speed. Keith Cooke has no screen presence whatsoever, but is good in his fights, with blazing fast speed on his kicks, but overall he isn’t given much to do.

Robert Clouse does a good job of making sure the action is front and center, and the film keeps it coming. The best fights are the bonfire fight, where Richard Norton and Keith Cooke really get to kick some serious ass, and then the fight in the high school weight room, where China beats the crap out of the same guy with a do-rag like ten times.

China O-Brien lets its B-movie flag fly high, and even though it was never the success all were hoping it would be, Cynthia Rothrock and Richard Norton would becomes fixtures of many B-movies for the 90’s until Jackie Chan and Jet Li showed up and booted Seagal and JCVD to B-Movieville.

CHOREOGRAPHY: (7) The fights are well done and more or less polished, not reaching the heights of her Hong Kong work, but is a hell of a lot better than her American output after this.

STUNTWORK: (2) Boy, did these guys ever suck. Their reactions were laughable, not acting realistically or even over the top with their reactions to being hit. That actually makes it kinda funny though.

STARPOWER: (7) Cynthia Rothrock would begin her reign as B-movie action queen, and Richard Norton would be in most films with her, but they will never ascend any higher. Keith Cooke’s career never takes off.

FINAL GRADE: (7) The cheese flows like a river here, and the acting is terrible, but the action is fun to watch, but be warned. 80’s fashion is in full effect here!