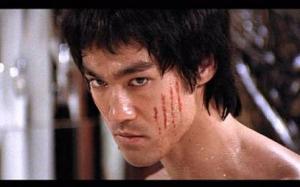 The greatest of all time.

Those hyperboles and more have been used to describe this film ever since it came out and to this very day. Unfortunately Bruce never lived long enough to see the film’s release and what would come afterward, but he did see the final cut of the film, and even he had to have known it would be badass, but he couldn’t dream of what happened next.

The film opens as Lee, a disciple of the Shaolin monks, fights an opponent played by Sammo Hung. It’s a terrific duel, and what a way to open the film! Afterward, the abbot tells Lee about a Shaolin traitor named Han who must be stopped, and so he has Lee speak with Mr. Braithwaite, an intelligence officer who is gathering information on Mr. Han so that interested foreign powers can act once it is proven that he’s keeping illegal arms and drugs on his island fortress. He’s holding a martial arts tournament, which is the only time outsiders can gain access to the island, and Lee was already invited. Bruce interrupts the conversation to have a training moment with a pupil, which seems to hold a level of danger for the pupil, who gets popped on the head every time he answers wrong. This film is full of so many quotables but it starts here.

“Don’t concentrate on the finger or you will miss all the heavenly glory!”

“Your skills are extra-ordinary!”

“You come straight out of a comic book!”

See? The script here was fantastic, but for whatever reason Bruce Lee and the screenplay writer didn’t get along, so during production he changed the name of one character to Braithwaite, because he knew Bruce had trouble pronouncing his W’s and R’s, and he was right. Bruce never did pronounce the name well.

Back to the review…after his run in with Braithwaite, we get flashbacks to all three of the main leads, to give us an idea as to why they are all attending Han’s tournament. It’s here that we learn that Lee’s sister Su Lin (Angela Mao) was killed while one of Han’s men O’hara (Wall) and some of his flunkies attempted to rape her. Great fighting here, although Su Lin must not have had much power in her punches and kicks, since right after she jacks a dude up he’s right back up again and chasing her. The end scene is great as she chooses death over being raped. Powerful stuff.

We then jump to Roper (Saxon) a gambling man who has gambled way too much and finds himself attacked while playing golf by some goons he owes money to. I don’t think John Saxon knows any martial arts, but he looks pretty decent here. He’ll look better as the film goes on. After that we meet Williams (Kelly) who is forced to beat up some racist cops on his way out. He kicks their asses and takes their car. That was cool. We soon find out that both Williams and Roper served together in Vietnam.

After a great scene on the boat between Lee and a bully, they arrive at the island and first meet Bolo (Yeung) and Han’s greeter, played by Anha Capri, and they are treated to a grand feast, and complementary women. Han comes off as a great James Bond Villain (like Dr. No), and he’s larger than life, and Shih Kein plays him with a lot of menace that virtually drips while making the smallest gesture. The next day the tournament begins, and Bruce shows up, refusing to wear the yellow gi’s that are provided and practically dares the fashion police to tell him otherwise.

The first day of fights are quite funny as Roper and Williams make side bets with one of Han’s men on each other’s fights, but the meat of everything is what happens that night, when Lee leaves his room, which is forbidden, so he can search the island for a way into Han’s inner headquarters, but is found by some guards, whom be beats quickly and painfully. The next day Han makes those same guards fight Bolo to keep their jobs, and you can’t help but feel sorry for them. First Bruce and now Bolo?! That’s some cold shit, and made even colder by the way that Bolo dispatches each of them, one at a time and in a very painful manner. I think I would have rather quit that job, but it looks like death is the only way out, and I’m sure it didn’t say that on the application. I would say the Legend of Bolo Yeung, and the kinds of characters he would play from now on truly started here.

Lee then faces O’hara in a fantastic fight scene that really shows off Bruce’s speed and grace, and ends in the greatest body stomp of all time. During that fight Bruce Lee and Robert Wall agreed that there was no way to give that last big kick and look good unless it was for real, and so that scene was real. Bruce really did kick Robert Wall that hard, breaking his chestbone, and two of the arms of the guys Robert slammed into on his way to the ground. Now that is dedication to your craft!

After ward Williams, Lee and Roper find themselves facing off against nearly the entire island, and an epic fight to the end ensues, and it only gets bigger and bigger until the final battle, where Lee faces Han in the classic Mirror Room…

What is it that this film has that other martial arts films don’t? They have a classic, if sort of James Bondish, story, and have filled it with larger than life characters embodied by men who were larger than life. The scale is epic, going from China to America and to Han’s island fortress, and has a cast of hundreds you rarely see in a martial arts film.

Add to all of this a cracking good screenplay, and classic music by Lalo Schifrin, and mix it up in a bowl with a huge helping of Bruce Lee, and there you have it! The scene where Lee entered Han’s fortress is a classic that hasn’t been surpassed to this day. Look out for Jackie Chan as one of Han’s guards that Bruce is forced to break his neck. The fighting is electric here and everywhere else in the film, which many martial arts films rarely achieve.

Props to Shih Kien for the end fight with Bruce. He performed fantastically, even though we knew he couldn’t beat Bruce, he still gave you a small sliver of doubt.

I love that scene when he sends his men to go kill Lee and Roper, and knows the names of each henchman! That make the guards that Bolo killed seem a bit colder…

Enter The Dragon changed martial arts films in China and introduced Americans to a style of fighting and choreography we hadn’t seen before, and sparked a boom that would introduce us to new stars, and the world of martial arts opened to the United States, and suddenly everyone wanted to know it. There are peaks and valleys, and the new pead wouldn’t come again until Jackie Chan made one last attempt at breaking through in the USA but all martial arts films and their stars past and current owe a lot to Bruce Lee, and to Enter the Dragon. I’ll go ahead and say it. The greatest mainstream martial arts film of them all.

CHOREOGRAPHY: (10) Every fight scene is fantastic and builds from the story and character, and the fight between Bruce and Han’s men is an instant classic. Bruce did a great job of playing to everyone’s strengths, so even John Saxon can come off looking good.

STUNTS: (9) The stuntmen didn’t do anything death-defying except to take Bruce’s punches and kicks. I take that back. It was death-defying. Yeah, great job all around.

STAR POWER: (10) Bruce Lee at his best, and Jim Kelly’s career takes off from here, as does Bolo Yeung’s. Great cameo by Sammo Hung to start it all off.

FINAL GRADE: (10) A martial arts classic that has stood the test of time and still hasn’t been surpassed. Bruce Lee’s final real film, and created a legend that the world would fall in love with, and a doorway into the martial arts world was opened to Americans, who stepped through, and both worlds would never be the same again…