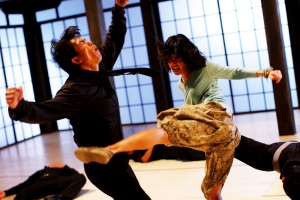 God bless Panna Rittikrai, for wanting to grab the no-holds-barred stunt work that hasn’t been seen since the 80’s Jackie Chan films. You know the ones, where every other moment is followed by an “Ow! That had to hurt!” or “Did you see THAT? G*** DAMN!” Along with Prachya Pinkaew they were able to get Tony Jaa on the map with Ong Bak, and show off just how crazy Thai stuntmen and women could be with Born To Fight. Tony Jaa, at the time, was the answer to the question of who would be the next big martial arts film star? The next question became, “so who would be the next big female martial arts star? What no one knew was that both men already had the answer to that, and it came in the form of a pint-sized button-cute college girl who also happens to be a Tae Kwon Do black belt, whom they tasked with a larger job than Tony’s: show of a bevy of martial arts skills in some fantastically choreographed fights and act your ass off so people will believe your character is autistic. Jeeja Yanin proves she’s up to the task.

Chocolate refers to the chocolate that Zen (Yanin), an autistic girl who lives with her mother, eats while watching Tony Jaa and Bruce Lee films. What even her mother doesn’t realize is that Zen’s autistic nature has made her a martial arts savant, able to watch martial artists practice at the dojo next door and be able to copy their movements exactly. The film opens with a flashback where we meet A yakuza operative named Mushashi (Abe) and his dealings with local Thai boss No. 8 (Wachirabunjong) or more to the point, his dealings with No 8’s main squeeze Zin (Siripong). They start an affair behind 8’s back, and sire a child, the aforementioned Zen. Both agree to stay away from each other as Zin goes on the run with Zen, and Mushashi returns to Japan.

Zin is found by 8 a few years later, and leaves with a piece of Zin as a warning. Many years later we meet the teenage Zen, and discover that Zin is suffering from cancer, and is running low on money to pay for the treatments. Zen’s friend Moom discovers a book that has a list of names of people who owe Zin money, or so they believe. They go to retrieve the money, not understanding the tragic events they’ve sent into motion by doing so. Every fight in the film comes from their attempts to collect the money from the various businesses that owe it. 8 finds out Zin’s location, and Mushashi must leave the Yakuza to save a daughter he’s never met and his true love, and it becomes a desperate fight to the finish for Zen to save the only thing she truly knows…her family.

Chocolate is a really different kind of martial arts film story. Yes, it does revolve around revenge, as so many do, but there’s more to it than that. The story at its core is a Romeo and Juliet tragedy, except Romeo and Juliet had a badass mentally challenged kid. The film reminds us that Mushashi and Zin are not good guys, or even nice people necessarily. The fact that we actually care about them is a testament to the terrific acting job they do, and the script. Perhaps they fight for Zen so much because she represents the one good thing they ever did? Not that Zen needed their help. Jeeja does a fantastic job, and bear in mind that the majority of her moves are Muay Thai, which she had to learn for this film.

The first real fight takes place in an ice factory, which gives a small taste of the mayhem that’s to follow, and follow it does, from terrific fight in a warehouse very reminiscent of Sammo Hung fight choreography, and an absolutely terrific fight inside a meat factory, which is impressive because the stuntmen do these stunts without wearing shirts, and you can feel the pain more since you know they aren’t wearing any sort of padding underneath. The final fight is stunning, starting with Zen versus two women and a guy on a rooftop to a fight inside a dojo against dozens of 8’s dumbass goons (why, o why do henchmen keep running in to fight when they just saw their five buddies before them get their asses kicked…rather easily? If they were my guys, they would be made to take tests in situational awareness.), and a fight with an epileptic fighter who uses a form of break dancing/capoeria, and finally her fight on the side of a three story building where she faces more logic-challenged goons and then 8 himself.  The dojo fight is an amazing display of choreography and movement. Panna Rittikrai goes all out for this one in a way that’s more impressive than Ong Bak. The fighting is more varied, and the challenges for Zen changes with each fight. 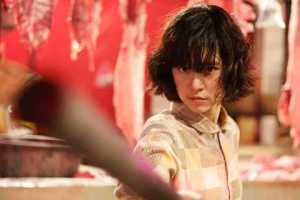 Jeeja Yanin is a true star in the making. She not only can perform the complex moves that Rittikrai had for her, deal with numerous injuries on a Jackie Chan level, but she was able to become a convincing autistic girl the entire film, even during the fights. She has the charisma to go far. Her film choices will always be what will ultimately sink or swim her career, but she has what it takes to be a star for her generation. Hiroshi Abe does a great job as her father as well, and his sword fight at the end is great, with an even greater start. Why sword fight when you’ve got a gun?

Prachya Pinkaew once again shows he knows how to direct a martial arts feature. The camera is dynamic but knows what angles to take and when to sit still. He loves to show the full movements of the fighters, not Bourne Identity-style camera work so prevalent in films today. Next to Jeeja herself are the stuntmen, who really gave it their all here. The Jackie Chan-style outtakes at the end of the film tell the story.

STUNTWORK:(10) I hope they paid these guys well…really well. They went all out for this one, and made sure you cringe at ever fall and kick/punch they take. The meat factory scene was fantastic. It could not have been easy. The out takes show what pains they went through as much as it shows Jeeja’s.

STAR POWER:(8) Jeeja shows here she has what it takes to become a big star. What happens next is up to her. Since Tony Jaa joined the monk hood, it’s just her and Dan Chupong in Thailand for right now.

FINAL GRADE: (9) Chocolate is a great martial arts film that has a good story as well as great fight scenes. Jeeja has the makings of the next big thing. Be sure to watch the outtakes during the closing credits to see what Jeeja and the stuntmen went through for your entertainment!