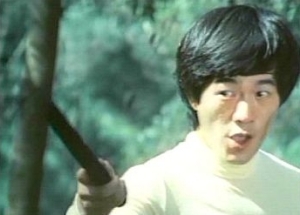 There are some actors who can become directors, and show an entirely new side of themselves, and show that they too have a vision and something to say within their films. They aim for greatness and reach it. Many martial arts stars have gone behind the camera to produce some interesting films, and even interesting failures. This…IS NOT ONE OF THOSE FILMS.

The movie opens with a “what the hell is this?!” moment, as we see a bunch of dudes I can only assume are the bad guys, primarily because Chaing Tao is there, and he’s usually a bad guy in most films he’s in, like this one . One old dude gets pissy when some young women tells him to take his pills, and so far we don’t know what the hell that means or who they are, and we see that just outside the mansion some poor bastard trying to sneak around, not knowing the woods he’s walking through are full of traps using yard equipment they MacGuyver up to jack any dude who sneaks around. Sure enough one of the traps get him, and then we cut to the opening credits during which Bruce Li shows off some Wing Chun moves with a blue background behind him and his training partner. Afterward, a women walks in to give him a telegram. I was flabbergasted to note that the women never questioned why the hell they chose to practice in a room the color of a smurf. I wondered more about what the rest of his house looked like rather than the nondescript telegram he receives.

The telegram gives Mr. Lee a mysterious message that leads him to take a plane flight to Hong Kong, where he is met by Mr. Outpuss, whatever the hell that name is, who takes him to the Hotel Kowloon, but Lee soon discovers the he and the men with him are not the men he was meant to see, therefore they earn a beat down in the hotel hallway.  What kills me is that after he beats them up, he leaves to find out what’s going on, rather than question the two unconscious a-holes lying on the ground in front of him! Lee goes to a nightclub, where he meets his real contact, but that’s short lived as his contact is killed while Lee was checking out a suspicious character in the club.

After this we learn that Lee was summoned to Hong Kong by his agency to spy on Master Pol, whose life is in danger from two drug cartels who want a list Po has of each member of each cartel, and Lee infiltrates Master Po’s home to find this list and somehow protect Po and his daughter by posing as a security specialist.

That night Lee gets attacked for reasons I still can’t fathom as he goes to meet one of the drug cartels. He defeats his attackers easily, and hears the offer the cartel makes to him so he will get Po’s list from him…by force. Lee wants to think it over, and the cartel leaders aren’t really keen on that, and sends a group of guys to teach him a lesson, and he beats the tar out of them until one guy gets the bright idea to toss some chalk dust in Lee’s face to blind him. They star giving Lee the business, but he’s then saved by…I shit you not, Napoleon Dynamite. No joke, a dude who looks like Napoleon Dynamite flies in and beats the tar out of Lee’s attackers. He and his mates are part of the rival cartel, and Lee agrees to help them kidnap Po’s daughter so he’ll give the list to them. He agrees with them, and uses both cartels to destroy one another until Lee is left to finish off the leaders of both cartels in a fight to the finish.

First off, after this film was over, I still didn’t know what the hell I watched. Not that I’m a fan of exposition, but if any film needed it, this one did. Both cartels make decisions that would lave you scratching your head, double-crosses and fake deaths, and all for this list that makes me go “so what the hell was the point with the list?” By the end of the film both cartels have had nearly ever member killed, which makes that list a little irrelevant now.  And one other note, as one cartel lord proves, guys with pot bellies really should not try to rock the tight turtleneck shirt. That is a lesson well learned in this film. Unfortunately it’s the only one.

I wish I had something nice to say about Bruce Li’s direction, but I can’t do it. This is a terribly directed film, starting with the acting, which is about at the level of a junior high school stage production. I don’t know what producer though it would be a good idea to let Bruce direct this film, but that jackass was probably living under a bridge after this disaster of a film came out. The editing is terrible, cutting entire bits of dialogue out, and the soundtrack uses the tracks from other films like Enter the Dragon and the James Bond theme. I know the film had a small budget, but damn, can a brother get some synthesizer or piano in here? Yes, the Average White Band was good, but c’mon! The story is even worse, as characters aren’t fleshed out, and we have no idea why the cartels make the decisions they do, and why Lee even cares. There is also this insane-ass twist involving one of the villains towards the end that will make you go WTF?! Nothing in the film would lead you to believe this was coming, and it just feels like it was shoehorned in at the last minute.

The one saving grace should have been the fight choreography, but my goodness, it was terrible. The movements are slow and plodding, and underwhelming and I know Bruce is better than that, ‘cause I’ve seen it in other films.  The best martial artist in the whole film…is Napoleon Dynamite. He actually brings some energy to the proceedings, and the best fight in the film is between him and Bruce Li. Their movements really “spoke” to each other.

Bruce Li deserves recognition as something more than a Bruce Lee clone, but this film is incredibly forgettable and won’t help him shed that label.

CHOREOGRAPHY: (2) Except for Napoleon Dynamite, it was terrible. No excitement, no innovation, and mostly no heart from the performers. There was no imagination to any of the fights. Just dreadful.

STUNTWORK: (4) Bad stuff except for some good acrobatics.

STAR POWER: (3) Bruce Li and Chiang Tao. Not nearly good enough to save this mess of a film.

FINAL GRADE: (2) This is one terrible Bruce Li film that sorely needed a budget and a good writer. Hopefully Li will not direct again. Save your eyes and money and avoid at all costs. Yikes!