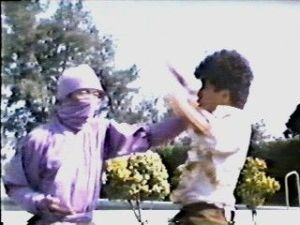 A moment of clarification: Don’t let the title fool you. Tony, Ricky and Bobby Toetaglia aren’t going to grab guns and cement blocks and go jack with Ryu Badassuku and his band of roving ninjas (actually, that’s a pretty darn good idea…) Nope, we’re talking about the chinese mafia in Shanghai, a group that condones prostitution, racketeering, robbery, jacking up the cops, and other assorted forms of entertainment, but Holy Hanna, if you show up to deal opium it’s your ass…unless that ass happens to wield shuriken, and then it’s anyone’s game. Now that’s the setup for Mafia vs. Ninja, and there’s something cool in the simplicity of that concept.

The film stars Alexander Lou as Jack Do, a country bumpkin (meaning he can kick all kinds of ass) shows up in Shanghai and befriends Charlie Wong after a mistaken identity moment almost gets Charlie’s ass killed by Jack. Jack came to Shanghai in order to get work that uses his kung-fu skills. Y’know, I like that. No existential or zen mumbo-jumbo, just a dude who knows kung-fu and wants to use it to kick some ass and get paid for it. Shanghai was the right place for Jack to show up, as he and Charlie, working as sewer workers, get shaken down for cash by thugs who work for the mafia. They say “give” and Jack says “with which fist” and grants the thugs a clinic on the definition of a beatdown.

The thugs run back to their boss, the second in command Tong Mao, who reports to the big boss, William Chung, who is actually a stand-up guy who order Tong to knock that shit off and leave those guys-who-obviously-beat-your-boys-down alone. Of course Tong doesn’t care for this idea, and believes that Chung needs to go away so Tong can take over as leader. Tong goes to the Japanese to get their help taking over the mafia after he kills Chung, and Silver How, the leader, agrees.

Note that I haven’t mentioned ninjas yet. They’re coming, but you have to wait a shit-long time for them. Luckily, when they do the fights get pretty good and the film moves along fairly quickly. So anyway, Tong’s thugs try to kill Chung in an ambush while he’s out with his boys one night, but Jack and Charlie are also there, and they fight off the attackers and save Chung. Chung wants to pay them back for the save, and invites them to his home. Tong sees yet another opportunity to be a douchebag, and tricks Jack into giving Chung a basket of fruit that contains a bomb that looks as if the Acme factory made it. Jack once again saves Chung, and in a rage jumps on his bicycle and chases Tong, who runs away on foot. That’s right, death rides a four-speed and the bells have tolled for Tong, who tries his best to stand and fight, but like the best Shaw Brothers, dies with a burst of blood capsules in the mouth.

Jack and Charlie join the mafia after that, and while Tong is dead, Silver How still likes the idea of killing William Chung, and along with his ninjas (there they are!) hires four others, a black dude with shitty kung-fu skills, a European knife thrower, a kendo master with a Hitler moustache, and a ninja who specialized in rope and chain weapons. Together they attack the mafia, and a war begins for control of the Shanghai underworld…

The film is a low-budget film with bad film stock, but the fights are pretty good Shaw Brothers style fights. It also has to be said that the editing is dreadful, and hampers some of the fights, the worst culprit belonging to the fight between Jack and the kendo master. The fight ends abruptly, one moment a full-on fight and then several killing blows that are edited so badly you don’t know exactly how the kendo master dies. Despite this the film makes up for it with some bizarre moments, like the scene where Jack and Charlie go to a whites-only club, and decide it’s time to desegregate that club with some fists, and fight a few guys who couldn’t possibly be difficult to beat, but somehow are.

Fellow reviewer The Outlaw Vern loves to talk about the multiple death scenes Steven Seagal give his opponents on occasion, but the death of Silver How has got to be in the Pray for a Final Death Hall of Fame. While fighting Jack, Silver is thrown on top of a table and given an axe kick to the chest, shattering his chest bone. Not content with this, Jack grabs one of Silver’s legs and places in a chair and brings his foot down, breaking the leg. Still not finished, Jack grabs the other leg and places it in the same chair along with the one he already broke and breaks the other leg and the one he already broke again. Not content with giving Silver the mercy of dying with a caved-in chest and two badly broken legs, Jack decides to choke Silver for a bit, and still not content with that breaks Silver’s neck mercifully. Silver presumably dies happy that the pain has ended. Yikes.

Also, Jack has a peculiar habit of when anyone does something to him that requires payback, Jack strikes a crazy pose and yells “ Revenge!” presumably to no one in particular, which is incredibly odd, since no one around Jack seems to wonder what the hell he’s doing and who he’s speaking to.

My favorite death scene involves Jack killing a ninja by impaling said ninja through the eye with the small branch of a tree Jack pulls out to use as a staff.

This isn’t a great movie, and not really all that good, but you can get a good laugh out of it as a late night film.

CHOREOGRAPHY: (6) Good old-school fight choreography that is hurt by being badly edited at various moments.

STAR POWER: (2) Alexander did a bunch of ninja vs whatever during the 80’s, and got a lot of work in other ninja films during the 80’s ninja craze, but not much else. His last film was in 1999…Shaolin Dolemite.

FINAL GRADE: (5) The editing really brings an otherwise decent ninja film down–way down. The kung-fu is good, but nothing Shaw Brothers and many other films haven’t already done better.