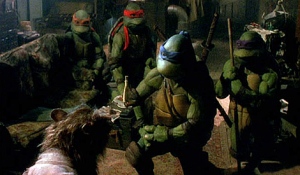 I’ll just say this up front: I was and still am a fan of the Ninja Turtles. The comic book, not the actual cartoon show, though I did like that as well. Hell no, the comic book is where it’s at. For those only familiar with the cartoon and movies, the comic book is NOT for kids. It’s actually got some hardcore shit. The turtles act like ninjas, don’t really care for pizza one way or the other, and have no problems killing people. Foot ninjas, to be exact, and speaking of them, The Shredder took no shit from anyone, and when all was said and done, Leonardo decapitated the Shredder in their final confrontation, and then burned his body to make sure he wouldn’t be coming back to life or anything down the road. Tell me that isn’t some hardcore stuff right there.

The difference between the comic book and that cartoon show is like comparing The Dark Knight to the Adam West 60’s series. So the question is, would the movie be more like the comic book or the cartoon?

Revisiting this film, I had no idea that Golden Harvest, home to Bruce Lee and Jackie Chan, had produced this film, but from what happens later, I shouldn’t have been surprised. The film starts with the audience being told that a rash of robberies across New York City has got the police stymied, and no one knows what’s going one, but we do see youths across town boosting TV’s, and anything else not nailed down, and delivering it to the Foot Ninjas, who evidently hang out in a white van waiting for them, and It’s a small wonder that the police were never–suspicious of dudes wearing ninja outfits with Spider-Man-like eyes driving around town in a van.

We soon meet April O’Neill, a reporter who believes the Asian community who are saying, “It’s ninjas, assholes!” Since the logic of this is apparent, no one believes April, not even her boss. One night she gets mugged by a group of thugs, and she is saved by the Ninja Turtles, who take out the lights and beat the thugs up, and when the police arrive they are hogtied and bruised. April finds one of Raphael’s Sais, and winds up taking it with her. We then meet the Turtles, Michelangelo, the surfer-dude knucklehead with nunchaku, Donatello, the brains of the outfit who fights with a staff, Raphael, the hothead who carries Sais, and Leonardo, the leader who runs around with 2 katana swords. They are under the tutelage of Splinter, a mutated rat who learned the art of ninja from his master, Hamato Yoshi. Pissed off about losing his sai, Raphael goes to check out a movie and stops some muggers from robbing an old lady. Unfortunately for the muggers Raphael lets them go, and they run right into the hands of Casey Jones, a masked vigilante who beats up criminals with various sporting equipment, in this case a hockey stick. The film started out somewhat kiddie, but Casey Jones makes his scenes a bit more violent than what kids would be used to seeing, but he’s step for step with his comic book version. He gets into a scrap with Raphael, who didn’t really understand what happens when you smack someone in the mouth with a cricket bat.

Soon April meets the Turtles after Raphael saves her, but Splinter is captured when the Foot attack their home while the Turtles are away. The Turtles go to stay at April’s, and one of the best fights in the film take place here, starting first with Raphael fighting the ninjas on the rooftop of April’s building. Good fight Choreography to be had here, as Raphael pulls off fighting techniques not unlike what you would see Jackie Chan or Sammo Hung do, but since Golden Harvest produced this, I can’t be too surprised. The fight then goes into April’s living room, and one of my favorite scenes in the film is here, where one ninja who is really good with nunchaku gets into a my-skills-are-better-than-yours nunchaku twirling match with Michelangelo. The reaction of the Foot ninja and especially those around him is great, like the ninjas “oooh” and “ahh” after Michelangelo’s twirling, like to say to their boy, “You gonna let him punk you like that? Show yo’ shit, fool!”

The Turtles, with the help of April and Casey Jones, escape to a farmhouse outside of town, where the team recuperates, sees Splinter like some sort of Obi-Wan Kenobi ghost figure, and bond with each other and with April and Casey. Soon they decide it’s time to go back and kick some ass, and asses do get kicked rather well in some great fight choreography. The final fight vs Shredder is the best, and gets rid of any funny stuff to concentrate on the fight. His fight with Leonardo is the best of them, and Splinter ends it all beautifully.

And yep, that’s the great Sam Rockwell (Iron Man 2, Moon, Galaxy Quest) as the leader of the thugs.

The film falls in between Turtles lore, funny like the cartoon, but the fights are serious much like the comic book. The fights are well done, and I know a martial arts consultant was brought in, presumably to help with the fight choreography, and I suspect it was someone within Golden Harvest’s camp. The fights nearly have a Dragons Forever flavor to it. This may be the best stuff Ernie Reyes Jr has done outside of The Rundown, which is kinda sad. So many failed expectations many of us had for him, but I’m saving that rant for another day, coming soon. As for the film, it’s a good introduction to the world of martial arts for kids, even thought it’s pretty dated.

CHOREOGRAPHY: (8) Surprisingly well done here. They were fluid and fun, and it couldn’t have been east for the martial artists in the turtle suits to perform those great moves!

STUNTS: (8) The ninja stuntmen took a lot of falls in this film, and some acrobatic flips after getting kicked that were well done.

FINAL GRADE: (8) The first film is a great mix of martial arts and comedy, everyone involved did a great job for the time it was done in. It satisfies the kids and the comic book geeks alike, and is a surprisingly good ninja film!