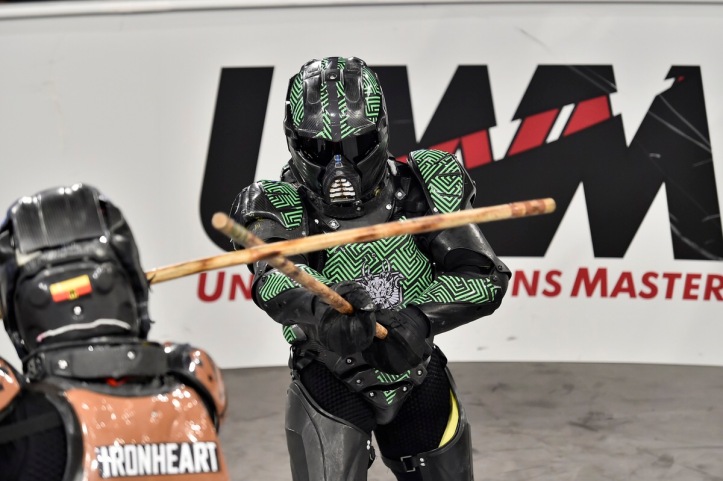 Okay this is interesting. Not sure how it will do, but color me interested. Can we toss Kanye West in there without the gear? Press release as follows:

Chiron Global has adapted its proven world-first capabilities in building sensor technologies into highly protective body armor that will enable the world’s top skilled weapons martial artists from a wide range of martial arts and cultural backgrounds to face one another in battle for the first time with science judging the winner.

The real-time wearable sensor technology is linked to a medical database that measures the force and location of every strike. The Lorica armor and patented scoring system objectively measures the force and location of strikes to the weapons martial arts competitor in real time, and is able to display the damage that would have occurred to an unprotected competitor on a video screen.

“We believe that UWM has massive international appeal to a diverse audience because it combines so many exciting elements that are really on trend at the moment. It combines weapons martial arts combat and ancient weaponry with leading edge technology and live video gaming features,” said Bunim/Murray Productions CEO Gil Goldschein.

“In addition to the high level of protection offered by the protective Lorica armor, the ability to customize the suits, the CGI scoring system and the cultural backgrounds and histories of the competitors, will make for a rich viewer experience,” added Julie Pizzi, Co-President Entertainment and Development, Bunim/Murray Productions.

“This will be a tremendous opportunity for many of these grand masters to pit their skills and traditional weapons art against other equally historical styles. Imagine, for example, a Nordic Viking pitting himself against a Japanese Samurai. We can’t wait to see the outcome!”

The Lorica armor acts like an extreme form of games console providing actual engagement data on the force and damage from each impact and showing this on the scoring system a bit like a video game.

“One of the key differentiators of UWM is that through the Lorica’s advanced sensor tech, which is connected to a medical database, we are able to offer viewers a fully immersive data-rich experience,” says UWM CEO, Colin Blake.

“The data captured by our scoring system means we are able to show viewers the number of strikes, the force of individual strikes, and damage stats, all while keeping our competitors very safe. We are then able, through CGI, to represent this damage in all sorts of exciting ways including a real-time anatomical version of actual damage to the competitors. Nothing like this has ever been done before.”

Other technologies that are able to be incorporated into the armor include cameras inside the helmets, and two way microphones, to give viewers a first hand experience of what it’s like to compete wearing the Lorica.