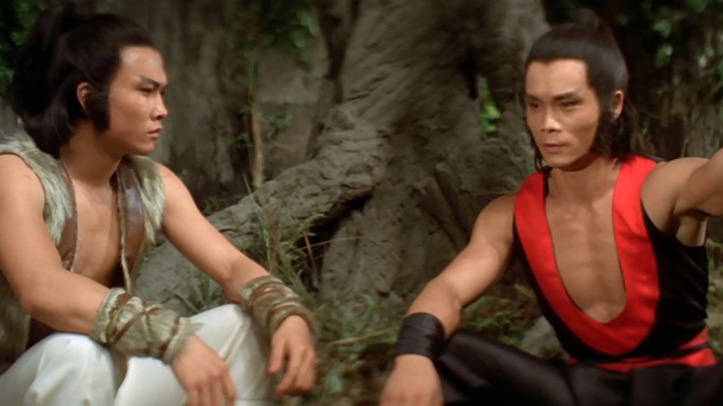 Masked Avengers begins as we meet an unfortunate bastard who runs into and is killed by a group of assassins known as the Mask Gang: a cult who kill for money but on top of that, for some odd reason that is never, ever explained or even gone back to later in the film, drink the blood of the men they kill. A group of warriors arrive in town to attempt to stop these killers and stay at a local inn, where they find themselves being spied on by the cook Gao (Kwok). They have a list of suspects, but Gao finds himself quickly moving to the top of their investigation (such as it is) as the top culprit to be one of the Mask Gang.

The warriors find themselves being picked off one by one as young Zeng (Sheng) Jun, one of their best fighters, befriends Gao, and together, begrudgingly, they get to the heart of the Mask Gang to find their leaders, but Gao holds a terrible secret, and even worse, one of the heroic warriors isn’t nearly as heroic as he appears to be…

Shaw Brothers silliness abounds, and that’s a really, really good thing. Philip Kwok is excellent as the mysterious Gao, and it won’t take long for anyone to figure out what he’s really up to. Chiang Sheng shows his normal comedy schtick, and does well with it, being youthfully exuberant and all Errol Flynn-like in the face of evil. Chin Sui-ho is great as the leader of the good guys, and I love the fact that the fan is far from the only weapon he carries, just the only one you see…The Mask Gang kills are treated like a horror film, and just like those movies there are some really good stealth kills, but c’mon, many warriors would have lived if they heeded this simple lesson:

“Don’t stand anywhere a goddamn trident can get thrown at you.”

There was one death that struck me as odd, when a captured Mask Gang member dies…by biting his own tongue out. Besides just being painful, I’m not sure how that kills you in mere seconds.

There is a second lesson this film tries to teach, and it’s actually pretty important:

“Showing off at the wrong moment will get your stupid ass killed.”

Oh yeah, and one last lesson that would’ve saved a couple of good guys:

“If you don’t see Gao move forward first, don’t be the first one to run ahead.”

In fact these guys are so “Star Trek Redshirts” that Gao pretty much just lets them run ahead of him, setting off whatever trap that Grants Painful Deaths. The final fights are the fast paced, acrobatic choreography you expect from the Shaw Brothers, and they do save the best for last. I have to admit, the leaders of the gang make their entrances like bosses:

The final boss fights are awesome, but really, the main baddie does mostly because he makes a really bad tactical decision that still has be baffled, but his death scene was really cool. Why oh why does everyone have to die with several tridents to the mid section in this film? Keeping in mind that Philip Kwok and other did the fight choreography is really impressive, and allows each of the main main characters a chance to strut their absolute best stuff, particularly with trident and fan work. Yeah, you gotta watch those dudes running around with fans…

A good Chang Cheh film that’s not his best but really comes close, and Philip Kwok really gets to shine here as a hero. A fun film from start to finish!