The moment I heard that director Sion  Sono had created a Japanese Yakuza-swordplay-martial arts…wait for it…hip hop musical I laughed out loud, but after further thinking it became my most anticipated film of 2015. Suffice to say now that I’ve seen it, my year has been made.

Tokyo Tribe starts in the future, where earthquakes have devastated Japan, and Tokyo has been broken up and taken over by a colorful assortment of gangs (you gotta see how they visualize this). After grandma drops the sick beat (yeah, I said that) we meet the best of the gangs, a peaceful group called Mushashino, a group that looks like the 80’s never left (in the best ways possible) led by the always calm Tera and his right hand man Kai (Dias). The entire film takes place over the course of one blood soaked night, when the leader of the worst of the gangs, Merra, decides to destroy Mushashino to exact his revenge on Kai (the reason why is left for the end of the film) but to do so means destroying every gang, and Merra tries to do so, but things get complicated when Erika (, the virgin daughter of the High Priest (who is unlike any high priest ever seen) has gone missing, and is purported to be in one of the gang districts. Toss in human furniture, a finger chopping insane mob boss who gets himself off often in front of…anyone, rapping grandmas, tanks, a black dude with superhuman strength, and a giant gangwar finale complete with a DJ spinning in the middle of the fighting, and you haven’t scratched the surface of the insanity… 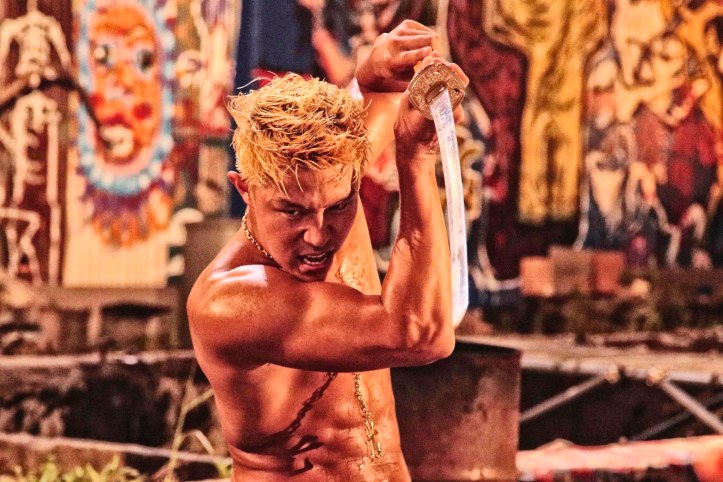 I loved this movie. I really loved this movie. It takes chances you will NOT see in American cinema nowadays, and the actors are all game for it. The hip hop songs, which are many, are actually pretty damn good. Special props go to Rikki Takeuchi as Merra’s father Buppa, as insane a Yakuza boss as you’ll ever see, and he chews every moment he’s onscreen. Sion Sono uses every camera trick imaginable to pull off this film, and despite everything he tosses onscreen, it all seems to work. My only real issue is toward the middle of the film, where I think the momentum slows down too much while spending time with Buppa and his crazy family.

The martial arts scenes are okay. Nothing great or fantastic, although the two hitmen sent by the High Priest are pretty awesome. The majority of fighting is done by Nana Seino, and she’s good, but really, the fighting just adds spice to the rap, and in some cases the actor have to act and fight at the same time. 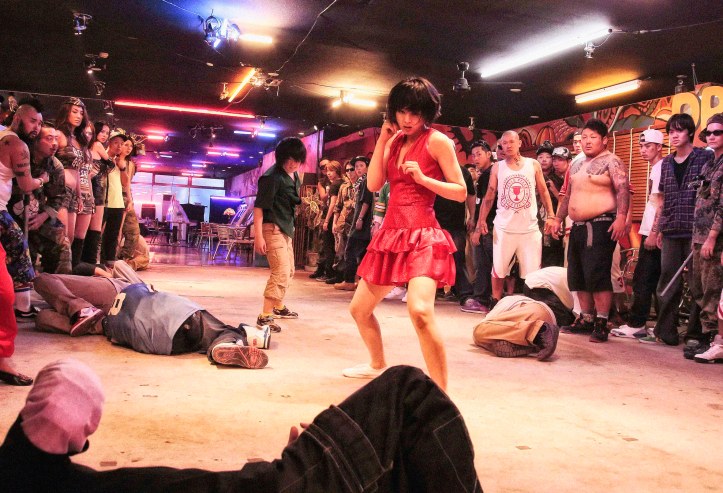 In the end the film is about belonging to a group that really represents all of us, differences and all. So yeah, amidst all the crazy there’s a cool message there. One of the best films of the year.

Tokyo Tribe is a punch to the gut blast of hip-hop fun! I bet you’ll be humming the final song, ’cause who doesn’t want to be a part of the Tokyo Tribe? Where can I join?

Tokyo Tribe is out TODAY in Theaters, iTunes, and VOD!!