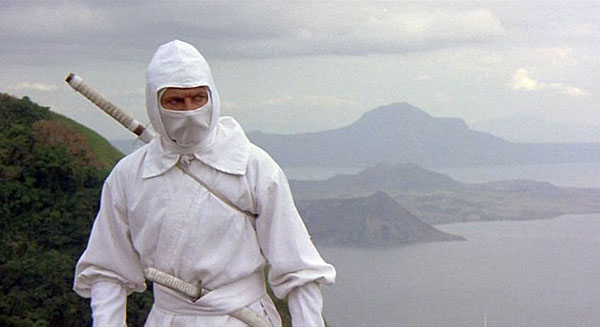 There, I said it with no embarrassment. I feel so sad for those who weren’t old enough to bask in the glory of Golan-Globus, for whom the Ninja films of the 80’s wouldn’t have been half as fun as they were, as well as other 80’s creations (like Chuck Norris films). Here we get a ninja film that dares to use the “Enter The…” in its title, which now somehow means it’s the best of its kind EVER. Now if the best of its kind means an Italian-actor-who-knows-no-martial-arts-pretends-to -be-a-ninja-master-for-two-hours-and-features-the-funniest-death-scene-of-a-villain-in-the- history-of-cinema then well, yeah, it is the best of the genre.

The film opens as we meet Cole, a Vietnam war vet (they all had to be in the 80’s) who has just finished his ninja Training in the Philippines, in the most ludicrous testing scene ever, where he runs through and it looks as if he’s killed like a dozen guys (even giving a dude a throwing star to the face! To the Face!) and then, after testing is done, those very same dudes walk back in like “it’s nothing. He never really hurt us. That blood? Nah, it was fake. Has anyone seen Yoshi?”. During his celebration dinner, Hasagawa (Kosugi) has to bitch out and point out that yes, somewhere in the film he’s going to be a BAD GUY. Cole leaves the dojo to visit his friend, Frank Landers, a fellow war veteran who is having problems with a local businessman named Venarius. who won’t take no for an answer, and a series of escalating attacks forces Cole to take up his ninja training in order to end once and for all, which brings him to a final confrontation with Hasagawa…

This…is a supremely stupid movie. Terrible acting, even worse martial arts. Having said that, it’s quite a lot of fun. Cole is at one point a hero and an asshole, as midway through the film he sleeps with his best friend’s wife with absolutely no remorse or regret whatsoever! Even funnier is, without a doubt, one of the funniest death scenes in the history of modern cinema, as Venarius dies by throwing star in one of the, well, you gotta watch this for yourself:

Venarius’ man servant is also one of my favorite characters. Respectful to the very end, he’s so respectful and British even the good guys can’t bring themselves to hurt him! Sho Kosugi is, well, Sho Kosugi, who does what he does best, and is the only person who doesn’t completely embarrass himself. The fight scenes are good, at least when the stuntman for Franco Nero kicks in and does his work. Everything else looks Adam West/William Shatner bad. But it’s really so bad it’s funny.

Franco Nero headlines a film that encapsulates everything that Cannon Films represents: preposterous stories, ridiculous but fun action, and terrible acting. And Sho Kosugi being awesome.