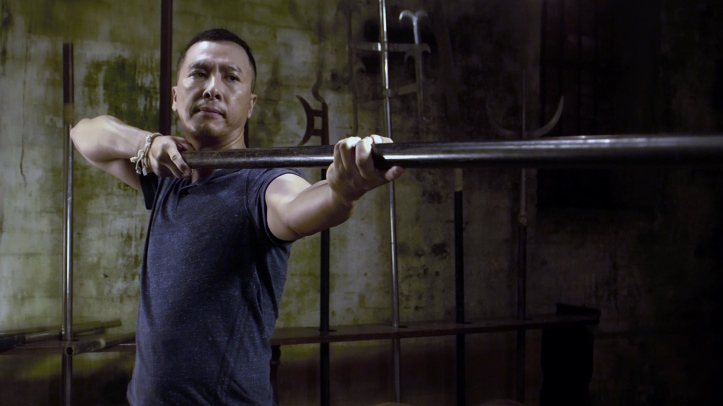 Let me start by saying this: Kung Fu Jungle is the best film Donnie Yen has made since any film not named Ip Man and Flashpoint.  Donnie Yen’s output since Ip Man 2 has been a bit underwhelming, but he fires back on all cylinders with this film. A second/third wind to his career? I think this film may be part of the reason he’s on the verge of retirement, and I’ll elaborate my theory on this later in the review.

The film starts as we meet Hahao Mo (Yen) a kung fu master and sometimes police martial arts trainer. He is bloody, and has just been in a fight to prove how good he is, but wound up killing his opponent (Logan) and turns himself into the police. Three years later, Detective Luk Yuen-Sum (Yeung) finds herself on a case involving serial killer Fung Yu-Sau (Wang) who is targeting kung fu masters across the city. Hahao Mo is released early from prison in order to help the police track down this killer, but Hahao knows more than he lets on, and the police increasingly wonder if they can actually trust him, but the bodies left in Fung’s wake start to pile up…

Kung Fu Jungle is a fantastic action film, and more than that its Donnie Yen and Teddy Chan’s love letter to all the kung fu films that inspired them. Just look at the starring credits above. Jackie Chan is onscreen as Hahao is watching Drunken Master in one scene. In fact, he’s specifically watching the scene where JC goes through the form, one of the best scenes of its kind ever filmed. Then you get to Shaw Brothers favorite David Chiang in a cameo appearance, and then, Raymond Chow appears! The list goes on and on, and I’m sure I missed someone. In fact, the only criticism I have is that some folks were left out. Where was the Greatness (Gordon Liu), and where was Sammo Hung? Jet Li? I suppose in Jet’s case he’s more a contemporary for Yen, so there could be that.

As for the story itself, and this is the genius of the film, is that it’s an homage to dozens of  old school kung fu films where a great kung fu master travels around fighting different schools and killing their masters for the sole purpose of being the best. Snake In The Eagle’s Shadow, Knockabout, Prodigal Son, and so many dozens more have used this same story conceit, and director Teddy Chan brings that same story to the modern day successfully. Donnie Yen is excellent as Hahao, a man who had paid the price and damaged his own soul trying to be the best. Baoqiang is equally good as the killer, whose reasons go beyond just wanting to be the greatest of all. Charlie Yeung also does a great job here, but I kinda think this film missed out in respect to her casting, and I thought Michelle Yeoh may have been the better play here, given the spirit of the movie, but Michelle Bai does the spirit of female action heroes well as Haoho’s love interest, Sinn Ying, and she proves to give Baoqiang a greater challenge than he suspects.

Louis Fan and Xing Yu are in the film more as extended cameos, and while I enjoyed their presence, I had wished they would have appeared in the film longer.

The fights here are some of the best choreographed fights Yen has put out in some time. The first fight in the prison is terrific, as are all of the fights Baoqiang gets into with his various opponents, but the climactic battle on a busy street between Yen and Baoqiang is truly great and hard hitting, with fantastic movement and speed. THIS is the Donnie Yen of SPL and Flashpoint that had been missing for a little while.

I said that this film may be contributing to Donnie Yen retiring. I say that because Donnie recently stated that he really has nothing more to say on camera regarding kung fu films. This film expresses his love for the genre and the career its given him as he pays his respects to those that came before him. After Ip Man 3 and this, I’m of the mind that he may be right. His filmography spans just about every type of martial arts film, and I’m not sure there anything else he can make that would be cool without simply spinning his wheels.

Kung Fu Jungle (called Kung Fu Killer by WellGOUSA) is a great piece of entertainment that shows Donnie Yen at his absolute best and writes a thrilling love letter to all martial arts films! You do NOT want to miss this!

Kung Fu Killer will be out in North America tomorrow in select theaters!