Michael Jai White is, without a doubt, one of the most underrated action film stars not named Scott Adkins. He went on a tear with a string of underground hits starting with Undisputed 2, and continued through Blood and Bone, and then the greatness that is Black Dynamite. He now returns to action with Falcon Rising, made with frequent JCVD collaborator Ernie Barbarash. After taking a small hiatus away from action, does MJW hit one out of the park or what?

Of course he does, and maybe has a new franchise action series for himself!

Falcon Rising follows former Special Forces soldier John Chapman (MJW), a good man and dangerous one, as much to others as to himself as he suffers PTSD from his time in Iraq, and contemplates suicide. He gets a visit from his sister Cindy (Ali) before she returns to Brazil, where she spends her time doing social work. Things get dark after Cindy is found beaten and barely alive near the ocean off of Rio de Janeiro. John Chapman, with the help of Brazilian consulate and former army buddy Manny Ridley (McDonough) dig deeper into the Brazilian underworld only to discover that Cindy had found information that the Japanese Yakuza don’t want going public, and John Chapman, code-named Falcon, goes on a one man killing spree in order to get his revenge for Cindy… 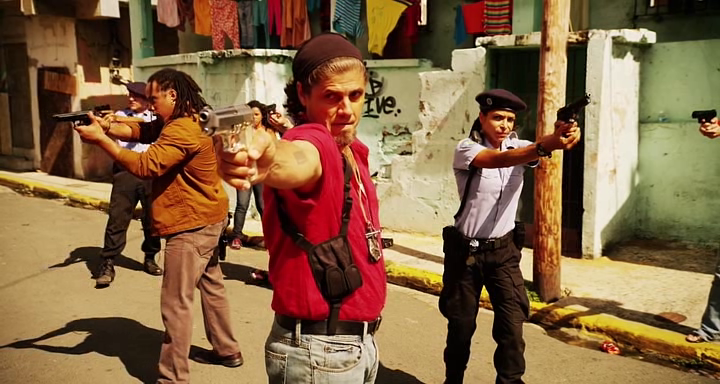 MJW, as always, does a great job as John Chapman, a man who constantly checks under cars to make sure there isn’t a bomb hidden underneath. He’s a sympathetic character, a man who looks to die at first but finds his purpose in life in dealing death to those who richly deserve it, and who better than delivering that to the Yakuza? Neal McDonough is always dependable as an actor (one of my favorites ever since Band of Brothers) and Jimmy Navarro is engaging and slimy as Thiago Santo, a detective who may know more about Cindy’s attackers than he cares to admit. Lateef Crowder doesn’t say much, but he’s menacing as Santo’s partner. Ernie Barbarash directs the film with a confident swagger and delivers a fast-paced story.

The fights here are really good, and create something that can built into something even bigger in the sequel (there had BETTER be one!) and it’s no surprise that fight choreographer par excellence Larnell Stovall is responsible for the action. He does a great job putting together the fights that accentuate MJW’s fighting skills, and the fight between MJW And Lateef Crowder is one I’ve been waiting to see for a while, and I was not disappointed except for wishing the fight had lasted longer, but that’s not Falcon’s way, and the movie wisely steered away from that. I love the fact that it became a 3-way duel involving a katana sword, a knife, and a chain.The battle versus the Yakuza at the Hacienda was also great to watch, and Larnell knows that jump kick takedowns are always cool to see.

This film is set up to be a series, and I can’t wait to see Falcon kick ass in South America again!

A great opening salvo into what can be a series of MJW films to go right up there with the James Bonds and Blade’s of the world! A great martial arts actioner set in Brazil that sizzles with great fights!