Jet Li returns as Wong Fei Hung in part 3 of his great Once Upon a Time In China series that helped define Jet as one of the definitive Wong Fei Hungs.

This film finds Wong Fei Hung engaged to Aunt 13 (Kwan) and returning home to visit his father, Wong Kei-Ying, to inform him of their impending nuptials, but of course there are other complications, such as the traditional Lion Dance, which causes major competitions among other kung-fu schools. Added to this the attendance of a group of British, Russian, and German representatives, one of whom knew Aunt 13 (and maybe had a romance with her back then), really complicates things to a level Wong Fei Hung hasn’t experienced in the series.

The first problem is his father, who may or may not approve of Aunt 13, since she is a distant relative of the family. The more pressing matter is the local Cantonese kung-fu association, led by the ever-laughing Chiu Tin Bai and his enforcer Clubfoot (Xin Xin Xiong), who is raiding any martial arts school thinking about participating in the tournament and smashing their Lions, and during their initial attack they injure Wong Kei-Ying, which draws the ire of Wong Fei Hung. In the meantime a plot is discovered to assassinate the Prime Minister during the Lion Dance, but is Tin Bai behind it, or the strange foreigners? 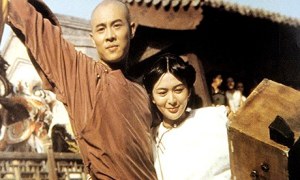 The series, as always, keeps things light and fun, and the fights are a mixture of traditional Jet-Li ass-kicking and wirework, and never trades on the fun, and has less serious moments than the last two films in the series, but still manages to deliver a message about nationalism and the encroachment of foreign ideas and technology. Here, though, Wong has something to say about education for Chinese as well to compete with the Foreigners. Jet is as good a Wong Fei Hung as he ever has been, and wears the character like a nice shirt. Max Mok is still ridiculous as Foo, and Rosamund Kwan is as beautiful as always as Aunt 13. We get a new addition in Xin Xin Xiong as Clubfoot, first an enemy and then later an ally. His story arc is interesting, and his fighting style, relying on his feet, make for fantastic fights with Jet Li. The story here is light, but still confronts a host of issues, and does so competently. Tsui Hark has always had a good bead on the Wong Fei Hung character, and nothing has changed here.

The fights, no longer done by Woo Ping, still manage to maintain the energy of the previous entries. The Lion dancing finale is great, but it’s the fights versus Xin Xin Xiong that are the showstoppers, as is the fight in the tea house. I could start to feel a sort of tiredness starting to set in, however. The ideas for fights featuring this character were starting to wear thin, and I think everyone knew it, which is why Jet and most everyone else left the series for films 4 and 5.

A kung-fu film that puts Jet Li back into the character he’s most comfortable with, and he delivers yet another fight filled chapter in the story of Wong Fei-Hung!