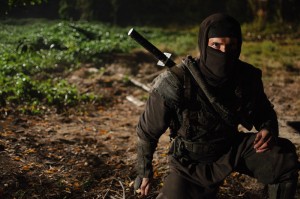 The original Ninja film was a breath of fresh air. Not only did it bring the ninja back in a big way (Ninja Assassin notwithstanding), but also continued to upward rise of martial arts star Scott Adkins and helmer Isacc Florentine after the classic Undisputed 3. Afterward came a little Indonesian film called The Raid, that upped the ante for everyone. Now we return to the adventures of Casey Bowman and his now wife Namiko (Hijii), and what ensues is a tonally different film than the comic-book style of the original.

Adkins returns as Casey Bowman, who, since the previous film, has married his deceased Sensei’s daughter Namiko and taken control of the Takeda Dojo. Namiko, who is now pregnant, asks Casey to go to the store to get chocolate and seaweed, and Casey returns to fine Namiko murdered by an assailant with a barbed chain weapon. During her funeral Nakabara, an old friend of the clan (Kosugi) shows up to offer his condolences, and to offer Casey a place to train and clear his head, at his Indonesian Dojo. Casey does so, but not before beating the daylights out of an entire dojo plus two thugs he believes were in on it. The thugs reveal that Boss Goro, a Japanese drug lord in Burma, had murdered Namiko. This takes Casey on a whirlwind trip of revenge, but fight after fight brings him closer to his target, who may not be the only villain responsible for Namiko’s death… 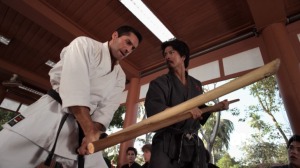 Ninja 2 is a far darker film that the previous movie, but that’s to the film’s advantage. Scott Adkins returns as a far more vengeful Casey, and his kills are much more brutal than anything he did in the original film. Adkins’ acting is getting better and better with each film, and he does an even better job of conveying Casey’s emotions as his world falls apart. The only thing I miss is the Hugh Jackman Wolverine jacket he wore in the first film! Kane Kosugi does a good job here as well, and I was happy to see Kane in a good film. I hope that he teams up with Florentine again in a film he can star in. Kane’s skills have always been exemplary, but his film choices have left a lot to be desired. Shun Sugata is also good as Goro, and I smiled as he channelled several of Sonny Chiba’s mannerisms into his fight style. If I have a true issue with the film is that there wasn’t enough action with Casey in his ninja outfit. 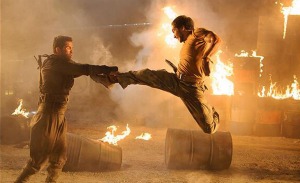 The fights by Tim Man is the star attraction here, and rightly so. There are a ton of fights in this film, and each one has a different dynamic and aesthetic, and the first fights involving Patrick Kazu Tang are great, but it’s only a hint at the things to come. A too-short fight that included Ron Smoorenburg (Who am I?) and a great fight between Casey Bowman and a fellow student Lucas (el Berni) leads to the two big fights in the film: Scott Adkins vs Tim Man, in a stunningly great looking fight, full of acrobatics and martial arts mastery, but the best is truly saved for last. Scott Adkins vs. Kane Kosugi is one of those fights I’ve always wanted to see (check that off my bucket list!) and it does not disappoint! Both men bring their all to the fight, and is a showcase of their martial arts at their prime. Can we please get Kane Kosugi into a film of his own?

Ninja 2 leaves Casey Bowman in a strange place. His wife and her father are gone. Casey, the man without a family, has lost his. What comes next? It will be fun to see where Casey the ninja goes from here.

Full of exciting fights and Scott Adkins at his best, the showdown versus Kane Kosugi is worth the price of admission alone!