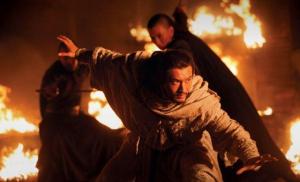 There is a remake bug that’s started going around in regards to martial arts films, and here is a remake of one of the classics. It’s actually not so much a remake as a reimagining/reboot. Andrew Lau (Legend of the Fist) directs this film, so does this film stack up to the original?

The film opens as we meet Wolf (Xiaoming),a rebel who is on the run with some of his men, known as Herders, but unfortunately they are attacked by the Emperor’s guards, the Guillotines, led by Musen (Yuchun), daughter of the man who put the Guillotines together. He right hand man is L (Juan). They are able to capture Wolf, but Wolf reveals that L will kill him, and soon. This allows Wolf to act with confidence, as no moment he fears death since he knows the exact time he will die. Sure enough the Wolf escapes, and the Emperor dispatches the Guillotines to bring him in, but things are complicated since Wolf kidnapped Musen during his escape. The Guillotines’ brotherhood is ultimately to each other, not to the Emperor, nor to the people. An order by the Emperor turns the Guillotines into wanted men, hunted by both the Emperor and the rebels. Faced with death from all sides, The Guillotines trust the only thing they have left…each other. 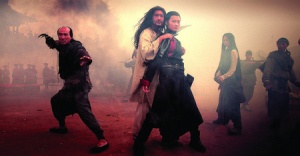 This is a slickly made film. The production budget can be seen onscreen for sure. The story is okay, but not great. I suppose it’s a matter of taste, but the most fun in the film is the opening, which features exactly what you want to see: heads and arms being lopped off with those cool blades. After that opening, you don’t get any more of those scenes. The main draw of the film is over and done with, as if the story decided that the concept of the Guillotines is only worth the first 5 minutes of the film. After that we get something more akin to what you’d see in a samurai film. This is not a martial arts film, basically an CGI effects film with wirework. It all looks great, but in no way does it improve on the original Chen Kuan-Tai film. Firstly, the fun is gone in place of a more serious story. I may be biased, and I probably am, but I want to see a film where guys are losing their heads in cool ways. I also want a hero who doesn’t spend eighty percent of the film crying. CKT never really cried, he just kicked some ass. I waited for that “I’m-done-crying-and-emoting-and-now-I’m-gonna-get-some-head-chopping-revenge” moment and it never came. The film is excellent on a technical level, always pretty to watch, and there is a story there, but it never really clicked with me. The acting was well done, except for all of that damn crying. I haven’t seen so much crying in a martial arts film since Best of the Best. At one point I just wanted to kick the characters and yell for them to man up and fight, not cry until you get killed, and then keep crying as you die. 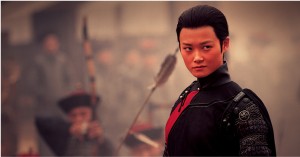 As for the martial arts, there really isn’t any. The opening has as much as you’ll see, so there isn’t much to say about it.

This review is particularly biased since I just watched the original Flying Guillotine, and loved it for the campy Shaw Brothers film it was. Compared to that film this one doesn’t stand nearly as tall, but by no means is it a bad film. Audiences familiar and unfamiliar with the original may really like this one, but I just couldn’t dig it. I’ll revisit the film at some point and see if I feel any differently.

A glossy, well produced and directed film that sits in the shadow of the original. No real martial arts to speak of, so if that’s what your looking for, you may want to look elsewhere.