Rivals is the second episode in the Dalibor Series from Jeff Debiase, a martial artist filmmaker and stuntman, about a killer-for-hire named Dalibor. In this episode he takes a job that pits him against Bojan (Lavalle) , who had just killed Dalibor’s master. Bojan was taught by the same master, and had issues with Dalibor in the past. Now both men face each other for the final time. Can Dalibor win and get revenge for his master? 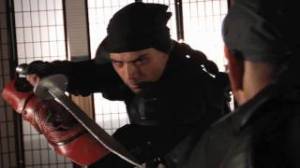 I watched the first Dalibor, and it was a decent effort that showed some promise, but had weak production values as this seemed to be a no-budget project. The fight choreography was okay, but not great. It still showed a lot of promise. Now we come to Episode 2, and wow, is it like night and day. The production values are light years ahead of episode one, and the acting was a lot better as well (Except for the guy who gives Dalibor his mission. That may have been intentional, however).

The fight in this episode consisted of escrima stick and sword fighting, and was well done and even better choreographed, with lots of good movement and speed.  There is a moment during the sword fight where both men were extremely close to each other, and the hand work and camera angle was note perfect here. There is one moment in the final fight that the editing seemed a bit off, but overall a fantastic second episode from Jeff De Baise, who has really grown in his direction, choreography and writing across the board. How high will he go next? It’s worth the wait to find out!

I hope Episode 3 is coming soon!

You can view Episode 1 and more from Jeff De Biase here: http://www.myspace.com/video/jeffdebiase