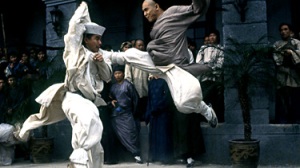 In the first film Wong Fei Hung (Li) was resistant to the westernization of China, while Aunt Yee and Bucktooth So embraced it. The sequel picks up some time later, and Fei-Hung’s views have evolved, and while he is still hesitant, he tries to get used to western customs and doesn’t quite view it as such a detriment to destroying Chinese culture as he once did, but upon arriving with Aunt Yee (Kwan) and Foon (now played by Mok Siu Chung, taking over for Yuen Biao) in Canton they discover a cult called the White Lotus, who have extreme views about westernization, and want to crush and destroy it, and anyone, Chinese or other, who represent it. The film opens with the White Lotus showing exactly how extreme they are in a scene where they burn western paintings, clocks, and even an American dog, which is just wrong.

Once again Aunt Yee, who dresses in western clothing, finds herself abused and embarassed by the locals, who consider her a traitor, many supporters of the White Lotus, and she finds herself quickly in their crosshairs. things get complicated, and continue to do so as Wong Fei Hung and goon attend a medical conference that gets attacked by the White Lotus, and they receive help from Dr. Sun (Zhang) who turns out to be more than just a simple doctor, and secretly plots against the White Lotus with his cohort Luk Ho Dung (Chiang). Wong Fei-Hung’s plate gets even fuller as he tries to protect them on their mission and protect Foon and Yee (not to mention his feelings for Yee) and comes into contention with the local constable Commander Lan (Yen), whose true allegiances may very well be to the White Lotus…

Once again Jet Li is fantastic as the reserved Master Wong Fei-Hung, and brings the same grace and intelligence to the character as he did in the original. Rosamund Kwan also does a great job again as Aunt Yee, but I found Mok Siu Ching not nearly as good a Foon as Yuen Biao was. Some of that may be that the story “dumbed down” the character of Foon, and didn’t seem to reflect the character growth he had in the first film. Donnie Yen was pretty good as the commander, but is more of a typical bad guy rather than anything special. It was great to see David Chiang (The Water Margin, Five Shaolin Masters) on film side by side with Jet Li, even if David didn’t fight. One thing I found missing from the original was a truly great scene like the one Bucktooth So had in the first film regarding a dying patient. In fact I missed So immensely in this film, since he represented a Chinese man who was so westernized he couldn’t read or speak Chinese very well. 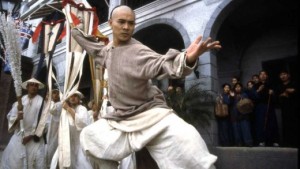 The fights are also great, and more of them than in the first film, but I’m not so sure the fights are better. There is a little more wirework, particularly at the end fight in the White Lotus temple. The fights versus Donnie Yen was a great showcase of staff fighting, some of the best ever done in film, but I was really hoping for a hand-to-hand confrontation between the two, but the White Lotus fight made up for some of that. Woo Ping pulls off some imaginative fights, the most imagination saved for the White Lotus temple fight and the siege on the Consulate building. The best thing is these fights are still in service to the story, and not the other way around.

Once again fellow blogger Dangerous Meredith really breaks down these fights, and you can read those here.

CHOREOGRAPHY: (9) Jet Li had one of the best staff fights versus Donnie Yen, but I wish Donnie had more to do. The White Lotus and Consulate fights were well done and brought the right amount of tension and excitement to the film.  Jet Li and Woo Ping still make magic together.

STUNTWORK: (9) The stunts were pretty elaborate in regards to the fight choreography, which they pulled off brilliantly. Their best work came with the Temple Fight and Consulate attacks.

STAR POWER: (10) Jet Li was working on all cylinders here, and Donnie Yen is now at the top of his game, but his talents were evident even here. Rosamund Kwan was good, but it was a real treat to see David Chiang in kung-fu film again!

FINAL GRADE: (9) Not quite as good as the original by a hair, Once Upon A Time in China 2 is a great film that successfully continues (and evolves) the story of Wong Fei-Hung and his friends.

NEXT: Jean-Claude Van Damme takes on half of Thailand in Kickboxer!