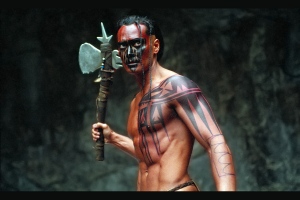 Someone had the audacity to take one part French period costume political drama, mix it with a romance, tie it into the French Revolution…and top it off with one part monster movie and one part martial arts, and without a doubt there is no way this should’ve worked, but damn it all if it does, and brilliantly so.

The film begins in France circa 1764, in the town of Gevaudan, where a beast has been killing the peasants for weeks. News of the attacks make their way to Paris, where the King dispatchs an investigator, the Royal Taxidermist Gregoire de Fronsac (Le Bihan) and his Native American companion Mani (Dacascos) who quickly get embroiled in the drama surrounding the family of De Morangias but find a friend in Marquis Thomas d’Apcher, and they will need them as there are not many they can trust, particularly when Fronsac gets closer to Marianne De Morangias, which draws the ire of her brother Jean-Francois (Cassel) who harbors quite a few dangerous secrets of his own, and add to this a mysterious prostitute Sylvia (Bellucci) and before long Fronsac and Mani are faced with dangers far beyond that of just the beast, who may not be just a mindless animal, but a political tool…

The film style lets itself be known right from the start as it begins with an attack by the beast and a fight between Mani and some locals. The story does a good job of introducing its multitudes of characters, and the beast’s attacks are brutal. The special effects done for the beast isn’t the latest and greatest CGI, but is good enough. They do a good job of hiding the beast for as long as possible Jaws style, and it works. Samuel Le Bihan plays Fronsac with charm that hides just how dangerous a man he really is, (and hot damn in one scene he proves it as he infiltrates the stronghold of the hunters and just goes all Charles Bronson on them) and while his part is mostly silence, Marc Dacascos gives his best performance here, and brings a badass grace (if there is such a thing) to the role, Monica Bellucci brings out tons of femme fatale sexiness to the role of Sylvia, and Vincent Cassel plays a great villain who becomes more unhinged and the film goes on. All of the other actors look like they stepped out of Masterpiece Theater, meaning they were exactly what they needed to be for the story to work. Kudos to Gans for making all of this work!

The fight choreography by Philip Kwok (real name Chui Kuo, veteran of films like the Ten Tigers of Kwangtung, Shaolin Rescuers, Crippled Avengers, Invincible Shaolin and the Five Deadly Venoms) starts off simple, but the fight choreography becomes more complex and exciting as the film goes on, perfectly mimicing the pacing of the story. Dacascos has his best onscreen fights since Drive, and Le Bihan also responds well and has quite a few good fight scenes himself, and Vincent Cassel is able to hang with the speed of the choreography as well. An incredible job done by all involved.

Christophe Gans makes what is still the only French Revolution-martial arts-monster film, and he found a way to make it all work beautifully.

FIGHT CHOREOGRAPHY: (8) Extremely well done. Philip plays to the strengths of his actors, and is able to create fast and fluid fight scenes. His most impressive work was in making Samuel Le Bihan look almost as good as Dacascos, which is no small feat. Marc is at his very best here.

STUNTWORK: (8) The stuntmen–and women–showed their stuff, and performed their side of the fight choreography well. Cyril Raffaelli (District B-13) served as one of the stuntmen, and the quality of their work is well shown.

STAR POWER: (9) Marc Dacascos never really became the star he should’ve, and this film is his best overall film. Vincent Cassel would go on to make some Hollywood films like Ocean’s Twelve and Thirteen, and Black Swan, and Monica Bellucci would star in a slew of films like the Matrix Reloaded and Matrix Revolutions, and Shoot ‘Em Up.

NEXT: Jason Yee, Lateef Crowder, Sasha Grey and Ron Yuan fall into mystery with The Girl from the Naked Eye!