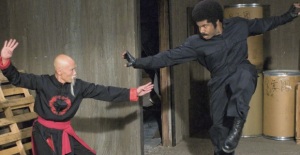 “ Who the HELL is interruptin’ my Kung Fu?”

“First lady, I’m sorry I pimp-slapped you into that china cabinet.”

There is so many quotable lines I could spend the entire review listing them. Suffice to say that Black Dynamite, the brain child of Michael Jai White, was royally screwed by Sony Pictures Classics, which picked up the film after it built up buzz on the festival circuit. The biggest crime was perpetrated by giving this film a limited released before kicking straight to video, but thanks to the Cartoon Network not all is lost…

Black Dynamite kicks off with his brother Tommy (speaking with a Shakespearean stage voice) getting killed during a drug buy as he is outed as being an informant. Black Dynamite (MJW) finds out, and vows to get his revenge on all those involved in his death. He gets his best friend, the always rhyming Bullhorn (Minns) and a local pimp named Cream Corn (Davison) to help him on a crusade that begins with revenge but then becomes a race against time to stop Fiendish Dr. Wu (Yuan) from hatching his scheme to…and I’ll leave it at that. I won’t spoil the fun surprises that await you, and there are some crazy surprises as the film goes to 10 and then dials up the insanity to a 12. 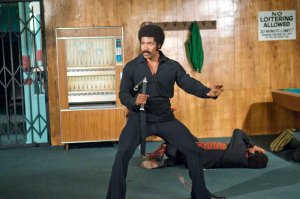 The story is absolutely crazy, going from what seems like a simple street revenge story to something completely insane, but how it gets to that point is perfectly believable as the story builds to a point that anything less would’ve been disappointing. The dialog is fantastic, even as some of it calls for the actors to literally “read” the script. You’ll see what I mean. The pimps, bad guys and others are fantastically realized, with names such as Tasty Freeze, Chocolate Giddyup, Mo’ Bitches, and Chicago Wind. Don’t forget Captain Kangaroo pimp. I can’t believe I just said that.

The heart of the film rests with the direction and actors. Scott Sanders does a masterful job of realizing the script, which is a love letter to blaxploitation films, which in the hands of a lazier director would be simply an Airplane-style spoof. Sanders set out to make a film that showed all of the low budget mistakes that made those films special. The microphone seen just above the actors head, terrible acting (in many blaxploitation films they literally had to get people off the street to act, and it shows) Perhaps the best written scene in the film is when Black Dynamite and his friends figure out the villain’s plans on a chalkboard at a pancake house.The film grain, edits, sets, costumes and music are so authentically 70’s that if you showed this film to someone that didn’t know any better they would think this were an actual 70‘s blaxploitation film. 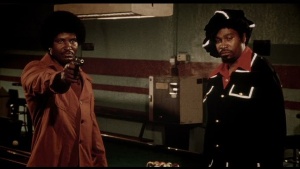 Michael Jai White is perfect as Black Dynamite, a complete badass who romances the ladies when he isn’t kicking ass, he sells it the entire way, no matter how ridiculous things get. He yells his kiai like Jim Kelly does when he fights. Byron Minns does a fantastic Dolemite impersonation, and Roger Yuan plays an over the top Fiendish Dr. Wu, and he would’ve been perfect in a James Bond film. You can tell everyone had a blast playing their characters, especially Tommy Davidson as Cream Corn, and James McManus as…well, you’ll see who he is, and he plays his character perfectly in the most insane moment of the film.

The fights are fantastically done. They reflect the time period, but even though they should normally look bad like a Dolemite film, well this is MJW and that ain’t happening, ya dig? MJW’s fight scenes are all well done, from the first fight in his home to his battle versus Dr. Wu and then the final fight that has to be seen to be believed. They reflect the 70’s style of fight choreography and Ron and Roger Yuan pull it off perfectly. Each fight escalates perfectly from the fight that came before.

CHOREOGRAPHY: (8) The fight choreography fits perfectly with the time period and are both cheesy and complex at the same time. Ron and Roger Yuan do a great job of pulling it off and keeping both cheesy and exciting. And yes, in this world Abraham Lincoln knew Kung-Fu.

STUNTWORK: (9) The stuntmen overreact when they are hit or shot, and take unrealistic spills for the hits they are given. In other words, they were note perfect with the time period. It can sometimes take more effort to overact these kinds of scenes than you may think.

STAR POWER: (9) MJW, Tommy Davison, Arsenio Hall, Roger Yuan and Nicole Sullivan all do a great job, but this is MJW’s film through and through.

FINAL GRADE: (9) Black Dynamite is a fantastic ode to 70’s blaxpoitation films that celebrates what made those films fun and empowering at the same time. A terrific film you’ll be quoting long after you watch it. Can you dig it?