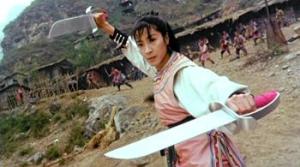 Wing Chun follows the adventures of the titular character Yim Wing Chun (Yeoh) who is the greatest martial artist in her small town, but is unable to get married as she concentrates more on her Wing Chun training rather than catching a man, unlike her sister, who is married at the beginning of the film, leaving Wing Chun and her aunt Abacus Fong with running their tofu shop. The local Scholar takes notice of Wing Chun and tries to woo her, even though he only wants to marry her to help him keep the bandits away from robbing him. Of course she would rather spend her time whupping up on bandits, and during a town festival they attack and try to kidnap a young woman named Charmy, and the village men try to help but as they really suck, Wing Chun has to intervene in a fun, fantastically choreographed fight that really shows off Michelle Yeoh’s flexibility and grace. The whupping she gives them comes to the attention of the two brothers who lead the bandits, Flying Monkey and Flying Chimpanzee (Keung) who want to beat the tar out of her. Things get complicated when childhood friend of hers Leung Pok To (Yen) shows up with the intention of marrying her, but as he hasn’t seen her in years mistakes Charmy for her, and this shakes Wing Chun’s resolve for the first time as Pok To thinks that Wing Chun is a man because she dresses in men’s wear ( Now that is pure fantasy. Mistake the beautiful Michelle Yeoh for a man just because she’s wearing men’s clothing? Negro please.)

Things get bad after Wing Chun castrates Flying Monkey with a piece of burning wood during a fight, which should be a final lesson to all men about doing wild jumps in the air with their legs wide open during a fight. Of course Flying Chimpanzee gets pissed at this, and kidnaps Charmy after defeating Wing Chun, and she and Pok To have to team up to defeat the bandits once and for all…and Wing Chun has to somehow convince Pok To that she really is the girl he’s been looking for…

Wing Chun, in all reality, is a rom-com with kung fu. When there isn’t any fighting then the audience gets embroiled in the comedy of errors as Aunty plots to win the heart of the Scholar no matter what, and Charmy falls for Pok To, and Pok To falls for Charmy but only because he thinks she’s Wing Chun, and Wing Chun isn’t sure about what the hell to do with any of it. This is standard Hong Kong comedy, and as such you’re either with it or you’re not. There isn’t really any middle ground with it, and I liked it as a whole. Michelle Yeoh is great as Wing Chun, in the way that while she is a great fighter, she’s not so confident when it comes to love and romance. Donnie Yen does get to flex his comedy muscles as well as fighting—but not that much, since this is Yeoh’s show. No one actually dies in this film, as it is meant to be a lighthearted romp (at least as much as a movie that has a guy get castrated by a burning wooden shard can be) and even has a really sugary happy ending, in which pretty much everyone gets married and lives happily ever after.

I’ve said before that Yuen Woo Ping has to be one of—if not the—greatest fight choreographer of all time, and he’s done nothing to make me think any different. All of the Michelle Yeoh versus Chui Sui Kueng fights are well done, and is the main showcase of the film. Woo Ping’s imagination goes deep again as he features a fight on top of two running horses that is just…well, Woo Ping. Donnie Yen’s few fights are all good, but as his character isn’t supposed to be as good a fighter as Wing Chun, his fights aren’t nearly as impressive as any of Michelle Yeoh’s.

Wing Chun is probably the most harmless of all of Woo Ping’s films. It’s isn’t heavy at all, tells a nice but kinda forgettable romantic slapstick comedy kinda story, and has some very good fight scenes.

CHOREOGRAPHY: (8) Once again Woo Ping digs into his bag for more imaginative fights. Since the film isn’t a serious one, the fights carry less weight than normal, but in no way does that mean the fights aren’t worth seeing. The final fight is the best one as Wing Chun uses strategy to defeat her opponent. Very little wire-work compared to Woo Ping’s other films made around that time.

STUNTWORK: (7) The stunt men did their jobs in this film, and performed admirably, but there wasn’t anything too crazy in this film.

STAR POWER: (8) Michelle Yeoh was near the top of her stardom, and Donnie Yen was still not living up to his potential, but you could see it was there. Chui Siu Keung (Duel To Death) is always great to see.

FINAL GRADE: (8) Wing Chun is a lighthearted comedy that wears it’s intentions on its sleeve, and Michelle Yeoh gives a great performance as Wing Chun, and the fight scenes are are great as normal for Woo Ping.