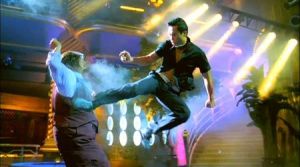 This is a great line uttered by underworld Hong Kong crime boss Wong Po (Hung) that really drives home what the story of Killzone really means, and I have to warn you, you may want to take your happy pills before you sit down to watch this film. The opening credits alone should prepare you to watch some somber shit, folks.

The film opens with the aftermath of a horrible car wreck, and we come to learn that in one of the cars was a witness and his family being escorted to testify against Wong Po. The only survivors are two Inspectors, Wah and Chan (Yam) and the five-year old daughter of the witness, Hoi Yee. Po is released since the only witness that could put him away is dead. At the hospital, Chan finds out that he has a tumor, and he’s living on borrowed time, and at the same time Wong Po and his wife suffer through another miscarriage. A chilling moment occurs when Po sits in the hallway just outside of his wife’s room, and is approached and befriended by Hoi Yee, who has no idea that this man had her mother and father killed, and Po has no idea she was the witness’ daughter. She is taken away by Chan, and the hatred between Chan and Po is palpable. Fast forward three years, and Chan and his team’s war with Wong Po has escalated, and Chan’s crew is dismayed to learn that they have a new boss, Inspector Ma (Yen). Before meeting him, however, they send one of their youngest Inspectors undercover to infiltrate Po’s organization, an incredibly dangerous prospect. 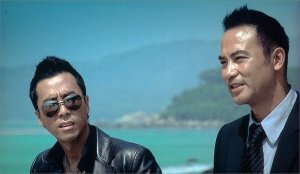 Ma has a past of his own, famous throughout the police force for punching a suspect so hard he damaged the kid’s brain. No shittin’ here. One punch and that dude got sent literally back to kindergarten, and Ma is seen in flashback struttin’ the fuck away. Now that’s both sad and badass all at the same time.

Soon Ma and Chan discover the body of the undercover cop in a field, and a young man with mental illness videotaped the entire thing, but it shows that Wong Po beats the agent, but another man kills him. Chan, obsessed with ending Po once and for all, has the tape doctored and given to Ma to make it seem as if Po did it, while they take revenge by killing the real murderer. 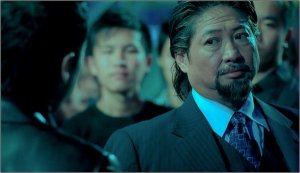 Po decides to take actions on his own against Chan and his team, without the knowledge (we suspect) of his wife and newborn child, and thus the immovable object meets the unstoppable force, and the moment when they meet creates a tornado of death and destruction that will envelope everyone in their wake.

Before this film came out, Donnie Yen was something of a failure in some respects. Everyone looked to him to take over from Jackie Chan and Jet Li, to be the next big thing, but his films never really did that for him. He’s made some good ones, but nothing that really said “here I am”. Now in his 40’s, he’s finally living up to his potential, and this film started him on his way. Meanwhile, Sammo Hung was already semi-retired, and this film cast him as something he’s never been, a main villain. He does a fantastic job, his brutality always under the surface for every reaction Wong Po gives. You know he’s a monster, and an unapologetic one who is still trying to be good father to his baby. Simon Yam is always money in the bank, and he brings it here as well, a cop who has sacrificed his moral compass to put Wong Po away for good. Jacky Wu Jing was a television star at the time, and was cast against type as the murderous Jack, Wong Po’s enforcer and killer. He plays the character as a killer who relishes what he does for a living, brandishing a knife and killing with reckless abandon. This film launched Jacky Wu Jing’s film career that has been going strong ever since. 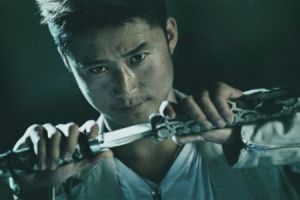 Wilson Yip’s camerawork is fantastic, from the Hong Kong skyline at night to the beach to a green field with storm clouds looming close by. It’s incredibly, hauntingly beautiful. The fight scenes are few, but when they come they are intense, and exciting as hell. The fight between Wu Jing and Yen is one of the best knife versus baton battles I’ve ever seen, fast and filled with complex choreography that only martial artists of their caliber can pull off, and the final fight between Sammo and Yen shows that despite his age and heft, Sammo is still one of the best martial artists in the industry. Their fight does a masterful job of mixing kung-fu with mixed martial arts, something I didn’t think could ever look good in a film, but they manage to pull it off here.

This film launched Donnie Yen into the upper echelon of martial arts stars, finally enabling him to take his place beside Jackie Chan and Jet Li, and since this film he’s gone through a string of classic martial arts films the likes of which hasn’t been seen since Jackie and Jet were in their prime. A brutal and unforgiving film that lives by the line that “God is Fair”, which is another way of saying that everyone will get what’s coming to them in the end, whether they’re an evil gangster or a group of cops who commit evils in order to stop them. You’ll be thinking about this film long after you watch it. The price of justice is steep indeed.

CHOREOGRAPHY: (10) This is quality versus quantity here. The two major fights are saved until the end of the film, but what incredible fights they are. Donnie Yen mixing MMA within a traditional kung-fu fight was a masterstroke.

STUNTS: (8) Fantastic scenes by each stuntman. They made it look as realistic as possible, rather than “actiony”. There weren’t many stunts, but what was there was done well.

STAR POWER: (10) Donnie Yen finally became the star many knew he could be, Sammo proved he’s still got it, and Jacky Wu Jing was introduced to the world. Oh yeah, and Simon Yam kicked ass as always.

FINAL GRADE: (10) One of the best martial arts crime thrillers you’ll ever see. Dark and unrelenting, not a single misstep can be found anywhere. Everyone brings their “A” game, and what results is nothing short of a new modern classic.