Sammo Hung and Yuen Woo Ping, both a few of the best fight choreographers anywhere, tag team on Magnificent Butcher, and the results are exactly what you would expect: a fun and inventive film full of great fight scenes and slapstick comedy.

Sammo plays the titular character Butcher Wing, a far from magnificent student of the actually magnificent Wong Fei Hung (played by Kwan Tak-hing, who’s played the character in over 75 films!). It isn’t that his Kung Fu is bad, far from it, but it’s because he’s not the sharpest tool in the shed. He always has good intentions, but they always lead him into trouble. The film opens as Butcher is ripped of his two pigs by the local Butcher, but as he’s actually a much bigger idiot than Wing, and through double talking by Wing he winds up giving him 6 pigs instead. ( I take that back. Butcher Wing isn’t an idiot. He’s just in the wrong job. He needs to be on Wall Street.) He then stops a man whom he thinks is a thief, but as he does the entire film, rushes into fights before understanding what is happening and why. Which is why the guy he beats up, thinking he’s a thief, is actually the servant of a prominent Kung-Fu Master who was ripped off in a game of chance. Since he did just get his ass kicked, and didn’t want to admit why, he lies to his boss Master Kao, who has conveniently perfected the Cosmic Palm Technique. I would assume that he can now kick ass throughout the galaxy, and hopes to do so once space travel is invented. Before taking off Kao greets his shifty as shit son Tai Hoi, who quickly shows himself to be a perverted horn dog, lusting after his dad’s godneice.

Soon Kao and his Get Fresh Posse arrive to have it out with Master Wong for the slight against his man. Of course Wong is engaged in calligraphy at that moment, and Wong tries to teach him a few new strokes, by way of using brushes to whup Wong’s ass. But Cosmic Palm ain’t worth much against Wong Fei Hung’s Paintbrush Style, which may very well trump all. What follows is a very well done fight scene as Wong fights Kao but continues to write his words, which may very well say “pwnd” as Kao gets his ass handed to him, and by the way, never get behind your master and ask him if he’s gonna bow after getting beat. That will result in a bitch slap with a shoe. You’ll see what I mean when you watch it.

Of course it comes out that Butcher Wing screwed up, and is punished by Master Wong by holding up vases filled with water in his mouth and arms. Ah, the days of corporal punishment. It’s at this time that Butcher’s fellow student, played by fellow Peking Opera School chum Yuen Biao plays a practical joke on Butcher by convincing a blind guy that Butcher Wing is a latrine. Hey, at this point either the comedy works for you or it doesn’t. I guarantee Will Ferrel or someone will rip this scene off soon.

Soon Butcher Wing’s brother Sai Kwong arrives in town, looking for Wing, not having seen him in over a decade. Unfortunately Sai and his wife run into Tao Hoi, who predictable starts ogling his wife, and scams them by saying that he’s friends with Wing, and gets some jackass to pretend to be Wing. Sai figures it out quickly enough, but gets beat up and thrown out of Tai Hoi’s home, and his wife is held captive. Meanwhile Master Wong leaves to go on a trip to buy herbs, leaving the school to his three students, which is akin to letting the inmates run the asylum, and of course all hell is going to break loose, and it does in spectacular fashion. Soon Tai Hoi, with balls of steel, walks down an alley only to get his ass beaten like…I don’t know, but it was bad. The person on the giving end of this is Sai, who wants his wife back. Once again Butcher runs in, not knowing what’s really happening, and beat Sai up, not realize he just jacked up his own brother. Tai Hoi decides, like the world class douche he is, to take advantage of this, and spins a lie to Butcher that the lady in question was his wife whom Sai had kidnapped. About this time another famous Chinese hero turns up in the person of Beggar Su, master of drunken boxing amongst other things. After saving Sai Kwong from committing suicide, he agrees to help him get his wife back. Soon Beggar Su comes face to face with Wing, and this leads to a hilarious and great fight scene between the two. Wing is defeated, but finds out about his brother and Tai Hoi’s Kung Fu Treachery (I ‘ve been waiting to say that.) . Unfortunately Tai Hoi escapes during the fight.

Later, Beggar Su and Wing infiltrate Tao Hoi’s house, and after beating up Tai Hoi’s buddies ( I assumed they were, because they suck as fighters) they make off with Sai Kwong’s wife, and in yet a another situation where Wing doesn’t think it through, they take the goddaughter of Master Kao with them. Soon the films takes a very dark turn as the goddaughter is killed by Tai Hoi during an attempted rape scene. Wing returns home to find her body, and Master Kao shows up just in time to think Wing did it. A terrific tension filled scene as you wonder how Wing is going to get out of this one. So, Master Kao and the Get Fresh Posse show up at Po Chi Lam and destroy the school sign, which instantly calls for epic asskicking, and it does in one of the two showstoppers in the film as Yuen Biao and a fellow student go up against Master Kao’s boys, one doing Monkey staff, and the other doing Fan fighting. Incredibly acobatic and a densely choreographed scene full of dozens of moves. Butcher arrives just in time to take a Cosmic Palm shot to the chest, and he and the other two students escape.

Beggar Su heals Wing by dunking him in a vat of advil, and soon starts training him in the 12 arms of Hung style. ( I love stuff like this in these old films, where the hero has to learn some new shit before fighting the main baddie. Nowadays these guys already know everything.) He learns just in time to fight the last of Master Kao’s boys, Wildcat, in a really acrobatic driven fight that is fun to watch, but Wildcat is no match for both as Beggar Su gives him the final death blow. 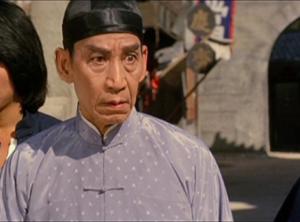 Meanwhile, the only guy to witness the murder of Kao’s godniece tries to blackmail Tai Hoi, but winds up taking a knife in the gut for his trouble, but is able to run to the home of Sai Kwong before exiting this life, and Sai Kwong is killed, so his wife can escape getting gutted by Tai Hoi. She goes to Butcher Wing to tell him what happened, and Wing understandably flips his shit, and he goes to pay Tai Hoi a friendly visit, just to show him what happens when the head is struck incredibly hard with a large piece of wood.

This lead to the final fight, the second showstopper as Wing takes on Master Kao. Equally funny and exciting, this is why you want to see this film. This fight is one of the best you’ll ever see, and Sammo pulls out every trick in his bag, and with Woo Ping running the show the results are astounding. You won’t believe how many moves are in one camera angle before an edit. Soon he beats Kao, just in time for Master Wong to return, and has a new sign for the school, which turns out to be the wrong sign (my copy didn’t translate what it said. Damn Fortune Star.) One of the best of the old school films.

CHOREOGRAPHY: (10) Of course a collaboration between Sammo and Yuen would turn out like this. Some of the most acrobatic fighting ever seen, and the number of moves in one scene is mind boggling.

STUNTS: (7) Pretty good, but no one does anything amazing, but the stuntmen throw themselves thrugh doors and windows well, and sells their scenes as they should.

DIRECTION: (9) Woo Ping knows how to shoot a fight scene, and where that camera needs to go for maximum effect. The story was well done, but the action is where it’s at here, and it doesn’t get much better.

STAR POWER: (8) Sammo Hung is all the star power this film needed, and he makes you laugh or stare in awe every moment he’s on the screen. Kwan Tak-Hing is the quintessential Wong Fei Hung, and always will be!

FINAL GRADE: (9) One of the best Kung-Fu films you can ever see, and a snapshot of the things to come from all involved. An absolute ass kicking classic.