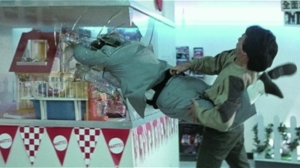 It’s said that Golden Harvest studios is the house that Bruce Lee built. If that’s so, and I believe it is, then Jackie Chan furnished the place, as his reign as king of HK cinema truly started here, and you can’t find a better representation of everything JC stood for than this film right here.

After enduring failure after box office failure under the direction of Lo Wei, Jackie Chan was considered a bust, and his contract was about to expire with Lo Wei. At this time Jackie had made a bunch of horrid movies in an attempt to be Bruce Lee, like so many others of the time. With nothing left to lose, Jackie was given reign to do what he wanted with his last few films. The first result was Snake in Eagle’s Shadow, which was a modest hit, his first doing things with a bit more comedic flair. Then followed two major hits, Young Master and the classic Drunken Master. Both together turned Jackie Chan into a star. A slew of hits followed, like Project A, The Lucky Star series, and Wheels on Meals. In 1985 Police Story was released, and the international community discovered what would take many Americans much longer to figure out-Jackie Chan was in a class all by himself.

The film starts with a bang, as the police are in the middle of a sting operation to capture notorious criminal Chu, who arrives at a shanty town to engage in a drug deal. Jackie arrives on the scene as Detective Kevin (Ka-Kui) Chan. I like this character a lot, because he’s a different type of action hero. He runs like an energizer bunny, never willing to give in to defeat when he probably should, is not the best boyfriend in the world, a bit overconfident, kind of a jerk, at least to some people, and kind of has a Charlie Brown (why me?) complex. Not the average kung-fu hero. Anyway, before too long the sting goes awry, as you knew it would, and a fantastic action scene commences that in many films would be at the end of the movie is how it starts here, looking more like a John Woo film than a Jackie Chan one. 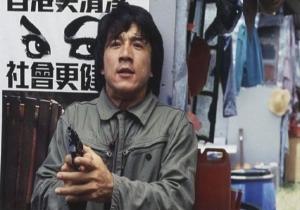 Soon all hell breaks loose, and an amazing car chase down the shanty town (it sits on the side of a big hill) that would be ripped off shamefully in Bad Boys 2 (Police Story still does it better, with a budget that probably was less than what Michael Bay’s production paid for Kraft services) kicks the film into high gear, and doesn’t rest until Kevin has chased the bad guy while using an umbrella to hang on to a speeding double decker, and fight on said bus, Kevin getting knocked off bus, and using his gun to finally stop the bus, sending two sorry bastards through the windshield of the top of the bus, careening head first into the concrete in front of Kevin in a scene you’ll cringe in pain at even as you rewind your player at least twice going “Did you see that shit?!”

After the opening things slow down a bit as we are introduced to the other characters in the film, Selina, a secretary for Chu who may or may not know about his drug-running, played with equal parts amazement at her situation and fear of what may come by Bridgette Lin. Maggie Cheung also checks in as Kevin’s long suffering (and at least through 2 more films after this one) girlfriend May. She’s equal parts his foil and the one person who understands him. Jackie and Maggie have a natural chemistry that plays well over the span of three films. Special shouts also go out to Bill “Uncle Bill” Tung as the assistant police chief “Bill”. He used to be a famous horse commentator that made the switch to films, and this was I think his first. He’s not really Jackie’s uncle, but has played one in so many of Jackie’s films that everyone simply calls him Uncle Bill. Bill passed away in 2006. I already miss the guy. Farewell, Uncle Bill!

Kevin soon has Selina in protective custody after arresting Chu after the shanty town scene, and what follows are comedy hijinks as Kevin, using his buddy Jaws (Mars, another JC regular) stage an attempt on Selina’s life to get her to cooperate. Things don’t go as planned as Selina knocks out Jaws with not 1, but 2 vases, and Kevin is forced to take her to his house.

After another amazing fight involving Kevin, a handful of thugs and 2 cars, Chu winds up getting off after his capture by Kevin when Selina sabotages her testimony, embarassing Kevin on the stand with some tricks of her own involving his tape recorder.

Not thinking that maybe-just maybe leaving well enough alone would be best for everyone, Chu decides to get revenge on Kevin by framing him for murder. The plan goes off without a hitch, although if that smug little bastard knew what was coming he may have opted to go on a vacation, somewhere like the Bahamas. Forever.

What ensues is a convergence of everyone on an unsuspecting shopping mall where Chu has his secret headquarters. Okay, they lose me a bit here. Why the hell would you place your evil headquarters between Lenscrafters and Ambercrombie and Fitch? Was office space that limited in Hong Kong? Of course, what does that say for the police? Or worse, mall cops? Did the group of well dressed drug dealers in the food court ordering Slushies not tip them off? Mall cops really aren’t worth a damn.

No sooner than can you say “property destruction” than Kevin and May arrive, following Selina as she tries to get the goods on Chu in his mall office, and Chu and his men discover her data theft when their magical Commodore 64 alerts them (I couldn’t use mine to spell my name right, and this one has security alerts and crap! WTF!). They show up to get Selina, unaware that Kevin is there too, with a bur up his ass to getting good old school fashioned vengeance using his fist on many faces.

The mall fight is the reigning jewel in this crown, and it doesn’t disappoint. I can’t begin to count the many moments when you wince as some poor jackoff gets his shoulder bounced off an escalator arm, or one gets dropped 3 floors down and has a wooden table at the bottom to break his fall. Kevin gets as good as he gives, getting punched, kicked, dropped 2 floors though a garden center, head smashed into glass, etc, culminating in a huge stunt involving sliding down a bannister wrapped in lights, going 4 stories down, his hands being burned by the lights as he goes. Don’t worry, you can’t miss it as it’s repeated twice more, for effect. Hell, if I did a stunt like that, I’d make your ass watch it multiple times, too.

For fans of Jackie who only really know him from his U.S. films will meet a side of Jackie they are unfamiliar with: Raging Jackie. This moment arrives when his character has taken enough shit from the bad guys, and decides to kick ass and win whatever way he can. He becomes a wildman, with the single minded goal of making sure that EVERY BAD GUY WINDS UP IN MORTAL PAIN AND IS PLACED IN TRACTION FOR SEVERAL WEEKS. This type of Jackie is prevalent in many of his 80’s films. Like Bruce Banner becoming the Hulk.

Police Story is an exciting entry that would influence an entire new generation of stars that would rule the Hong Kong action roost for the 80’s and most of the 90’s. If you want to start watching Jackie Chan films, I would highly suggest this film. One of the best martial arts films ever. Nearly a complete package.

CHOREOGRAPHY: (8) The fighting in this movie was different from any other kung-fu movie at the time. Gone are the animal forms, replaced with a modern style of fighting with faster paced fight scenes.

STUNTS: (10) Folks, it doesn’t get any better than this. The stuntmen nick-named this movie “Glass Story” due to the many panes of glass they went through. Keep in mind, it wasn’t the normal candy glass used in films. It was a harder material that could simulate glass. What resulted was many cuts and gashes. The stuntmen performed well. I would ask you to place this next to The Big Boss and tell me whose reactions are better. The falls, hits, and so many, many “ouchy” moments that can’t be counted on one hand. Most of these guys never worked with Jackie again after this film. That’s the level of awesome we’re talking about.

DIRECTION: (7) Pretty good. Jackie knows where to place the camera for maximum effect, and how to let the camera linger just a second longer on stuntmen who were obviously hurt, just so you know what they just did was real.

STAR POWER: (10) Jackie brought all the charisma and obvious star power to the film, Maggie Cheung was new, but it was obvious she would soon forge her own stardom, which she did. Brigette Lin was the Meryl Streep of Hong Kong at the time, as also held up her end of the film. Did I mention Uncle Bill?

FINAL GRADE: (9) Fast paced action, comedy, and amazing stunts are what defined Jackie Chan, and few movies brought it all together in equal parts than this.