JCVD returns as a black-ops agent Deacon Fry who arrives in France in order to give one of his kidneys to a niece he’s never met. Thing immediately go wrong when, after having a one-night stand, wakes up in an ice bath only to find that one of hiss kidneys has been taken. Deacon must then team up with his estranged brother George (Ralston) in order to track the kidney down, and rain vengeance on those who did so. George, a pious man, must reconcile the violence committed in his daughters’ name, even as the danger grows larger the closer they get to the kidney, but even they are not prepared for what they find at the end of their journey…

Pound of Flesh hits all of the normal JCVD tropes: the splits, butt shot (yes, even at age 51! Bravo!) and the tortured action heroes he’s been playing ever since he hit DTV land. This isn’t a bad thing necessarily; but I do miss the lighter characters he played in his hit films of the late 80’s and early 90’s. Deacon is a hardened man, but regretful of actions he took…actions that caused the rift between himself and George, who seems to be his opposite. JCVD does a good job portraying Deacon, and his performance, particularly at the end, is great, and gave me something that 1) I had never seen in a JCVD film, and 2) showed me a performance I wasn’t sure he was capable of, and it struck a cord, at least with me. John Ralston is a good foil for JCVD as George, who goes through a transformation throughout the film to discover that he may be more like Deacon than he’s ready to admit. 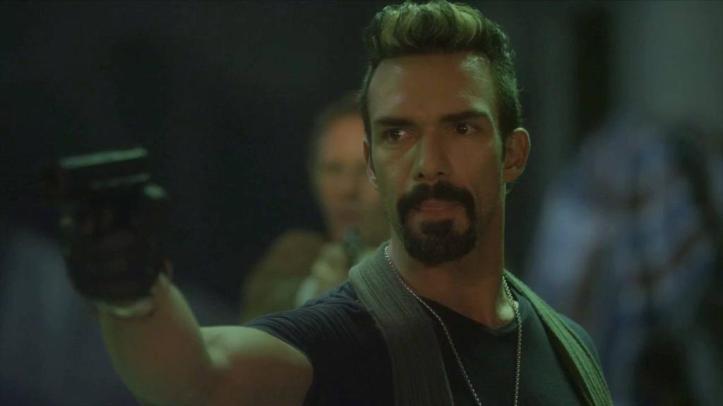 And of course we have to talk about the late Darren Shahlavi as the lead villain Drake. His charisma onscreen is great, and my only regret is that there wasn’t more of him. He’s a great match for JCVD as he plays his character not-quite-over-the-top, something that actually brings a lot of energy to the film when things seem like they are about a lag a bit. The film pays a dedication to Darren, and I’m so glad they did. His performance is bittersweet, as it’s a reminder of how much he had grown as a performer, both in stunts and in acting. Ernie Barbarash, even though he’s working with a low budget, always seems to get the absolute most out of every dollar spent, and here is no exception, as this may be the best looking JCVD film to date not named Universal Soldier (or Hard Target).

The fights choreographed by John Salvitti, who has been part of Donnie Yen’s stunt teams, gives something new. I was expecting the normal JCVD kicks, ending in his patented helicopter kick, but Salvitti goes in a different direction, adding more mixed martial arts to his repertoire, especially the final fight between JCVD and Darren Shahlavi. I’m normally not a fan of the style, but it works well here.

A damn good action film from JCVD as he rollercoasters his way to vengeance as he battles Darren Shahlavi. Jean-Claude Van Damme proves once again he can deliver the goods!