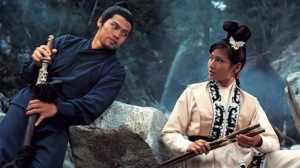 Golden Swallow is the sequel to Come Drink With Me, and Cheng Pei Pei returns as Golden Swallow, a warrior woman who has now found peace with her friend and potential lover Iron Whip Han To (Lo Lieh) who only fights as a last resort. Of course their peaceful existence doesn’t last long, as Silver Roc (Wang Yu) an old lover of Golden Swallow, starts killing members of the evil Golden Dragon Clan and leaving evidence that Golden Swallow was responsible in order to draw her out of hiding for reasons to be revealed. Add to to all of this an evil kung fu lord and dozens of inept bad guys, and what you get is a drastic reduction in the population of China. Oh yeah, and Golden Swallow is torn between both men as she loves them both.

Chang Cheh is very much in his operatic form here, and it’s okay, not great, but shows the greatness that’s to come in his future features. There is some great scenes here, particularly right before Silver Roc’s attack on the Golden Dragon Clan headquarters, as they punish three unfortunate henchmen for sucking really badly, and later as they accuse a young boy of theft, and the fate of the boy and his father really shows how bad the Clan actually is. Jimmy Wang Yu is an unlikeable prick as Silver Roc, and plays that to the hilt, making one wonder what Golden Swallow saw in him to start with. Lo Lieh is his always cool self as Iron Whip, and seems to take a zen approach to everything, which is good considering all the death and violence that will surround all of the characters before the end of the film, and Lo Lieh is able to pull it off with ease. Golden Swallow surprisingly takes a little bit of a backseat to the proceedings here, but she is still the main character, and Cheng Pei Pei plays her as beautiful and fierce, but this time torn between her love for two men, and her confusion is well played.

The fights are better here than in the previous film, and the choreography has improved, if not the “fighting speed”. The fight at the Peace Tavern (heh) was good, and Cheng Pei Pei did a great job here, and looked much more comfortable with the fight choreography, which is still very dance-like, but showed a little bit more grit than Come Drink With Me. The finale with Jimmy Wang Yu versus a horde of Golden Dragon henchmen is terrific, and a fitting Heroic Bloodshed finale for the film.

Golden Swallow is a fun Heroic Bloodshed film that was a taste of the things Chang Cheh had in store for audiences everywhere featuring a fierce performance by the first lady of Kung-Fu, Cheng Pei Pei!

Next:  Jean Claude Van Damme’s splits make their first appearance in No Retreat, No Surrender!

Error: Twitter did not respond. Please wait a few minutes and refresh this page.