Hot off of Shaolin Soccer, funnyman Stephen Chow  was just getting warmed up for what may be the crowning achievement of his career, a film that pays homage to cinema in general and kung fu movies in particular. Part kung-fu, part cartoon, Kung Fu Hustle raises the kung fu comedy bar to new heights.

Stephen Chow stars as Sing, a complete loser who, with his oafish friend Bone attempt to pull off scams on any sucker they can find. They make the mistake of going to Pig Sty Alley and trying to screw a barber out of paying for a haircut, pretending to be Axe Gang members. After being “attacked” by the people living in the complex Sing aligns himself with the real Axe Gang, who just happened to arrived. Sing unknowingly sets off a chain of events that finds the Axe Gang leader killed and replaced by his even worse second in command Brother Sum, who vows to destroy the inhabitants of the building. As it turns out the building is home to some of the greatest martial arts heroes of all time, and The Axe gang suffers defeat after defeat, but with Sing’s help they are able to find help from the greatest kung fu killer of all time. Sing believes that only the bad guys ever win, but can his eyes open to the truth about himself in time to save the people of Pig Sty? 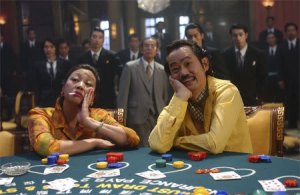 There isn’t a comedy stone left unturned here, and it all starts with Stephen Chow the actor, who does a great job as the hapless Sing. In many ways he plays a straight man to some of the most ridiculous moments of the film, and that’s a good thing. And, and as always, Yuen Wah brings his A-game to this part as the lecherous landlord, and Yuen Qiu stole the show as the tough as nails landlady. Seeing so many greats of the Shaw Brothers and early Sammo Hung era kung fu fighters was simply a treat. The story itself is well told, and the more out-there moments, like the chase between Landlady and Sing are just laugh-out-loud funny, even if it makes no real sense, and the slapstick comedy, such as the knife throwing scene (one of my favs) are just hilarious.

Sammo Hung did a fantastic job choreographing the fights here (when isn’t Sammo great at this?) and it all escalates exactly as it should. The first fight in the courtyard is great, and Sammo lets the featured martial artists look great. My favorite fight, from every compositional standpoint, is the fight versus the Harpist assassins. Their harp served the dual purpose of being both a deadly weapon and providing the music for the fight scene, which is brilliant. The wire work was well done, and is used to very good effect and doesn’t shadow the actual martial arts being done. The final fight is great and Stephen Chow gets to show off what he can do, and Leung Sui-Lung (Gallants) gives Chow a run for his money here. The fight at the Axe Gang’s casino also deserves a mention, a fantastic blend of martial arts, wirework and special effects that allows Yuen Wah and Yuen Qiu the chance to show they’ve still got it!

Stephen Chow made what may very well be the best kung fu comedy of all time! A brilliant mix of kung fu, comedy and special effects. Rarely does it mesh so well, but Chow pulls if off with gusto!