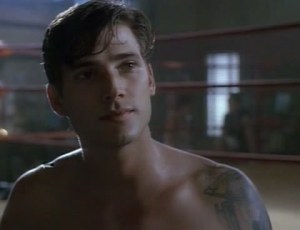 Fight Choreography by Benny” The Jet” Urquidez and Jim Nickerson

For whatever reasons, after Jean-Claude Van Damme had his hits films in Bloodsport and Kickboxer the producers were hellbent on selling the rights off to whomever would buy them, and were successful, if not incredibly stupid for doing so, and rather than getting a new JCVD sequel, we get a film directed by B-movie director Albert Pyun (Cyborg, Captain America, the crappy one) and written by future superhero writer David Goyer (The Blade films, Dark City, and Batman Begins) for whom this was his second film, and starring newcomer Sasha Mitchell, famous at the time for starring in the American TV series Step by Step, and was a kickboxing champion.

The film begins as we meet David Sloane (Mitchell), youngest brother to Kurt and Eric from the first film, who has been running their gym a few years after both Kurt, Eric, and Mylee were all murdered at gunpoint by Tong Po after the events of the first film. David is a good man, and takes care of the gym as best he can, but is having problems as the gym doesn’t have enough money to stay open, which had been kept open by the Sloane brothers by the winnings from their fights. The problem is David no longer fights, seeing fighting as the reason his brothers were killed, and has adopted a more zen way of thinking, and fighting. David gets an offer from kickboxing mogul Justin Maciah (Boyle) who wants David to become his main fighter and spokesman, but David refuses, but Maciah is able to convince his star pupil Brian to fight for him. As the bills pile up, David unknowingly sets off a chain of events by challenging Maciah’s fighter Neil Vargas (Hues) to a match, which David wins. Maciah’s business partner from Thailand, Sanga (CHT) has David injured and burns down his gym in order to get Kurt Sloane’s master from Thailand, Xian (Chan) to come to America, and Sanga sets a plan into motion to have David and Xian come face to face with Tong Po, and Sanga will attempt to regain his people’s lost honor… 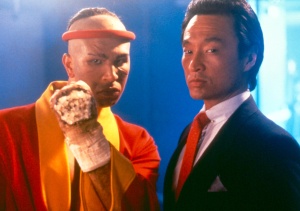 The film has a decent story, if a very straightforward good versus evil story. David Sloane doesn’t get to go on a journey of discovery the same way that Kurt did, primary because the budget of the film was so low they couldn’t leave Los Angeles, so the scope of the film is limited, and the rest of the film follows suit, even down to the songs, which had to get a guy who sounded a little like Stan Bush to do the music.

Understand the implication of this: they had to get a guy who was a cheap knockoff of Stan freakin’ Bush. Yes, Stan “You Got The Touch” Bush.

That’s how low-budget this film was, but to his credit Albert Pyun didn’t waste whatever dime he had to make the film with. Sasha Mitchell was pretty good as the last Sloane Brother, even if the acting was stilted in places, more blame to the script written than anything else. Peter Boyle was sufficiently slimy as Maciah, but of course classic baddie of the 80’s and 90’s Cary Hiroyuki Tagawa stole the show as the main villain, and Tong Po, for whatever reason, actually looks far more intimidating here than he did in the original film, a good job by Michel Qissi, but he doesn’t appear until nearly the last fifteen minutes of the film. Dennis Chan is as good as ever as Xian, but taking him away from the Thailand setting was a bit disconcerting, but any amount of Dennis Chan as Xian is good enough for me. Look for the legendary Bruce Lee grappling trainer Gene Lebell as the referee, Benny Urquidez as a corner man, and Brian Austin Green (Beverly Hills 90210) as a punk kid getting schooled by Mitchell.

The fights may have been well done, but it was hard to tell, because the fight choreography is lost among too many close-ups, slow-mo, quick edits, and some long shots that are too far away from the action. Benny Urquidez and Jim Nickerson look as if they did a good job, but it was too hard to tell as the editing and Pyun’s directing (no, he doesn’t know how to properly direct a martial arts fight scene) bring it all down, except in the final fight, which has better editing and camerawork than any other fight in the film.

A sequel to Van Damme’s film that while showcasing a new talent in Sasha Mitchell, and bringing back Dennis Chan, fails to live up to the first film’s action and training sequences.

NEXT: Marc Dacascos and Scott Wolf search for the Double Dragon!