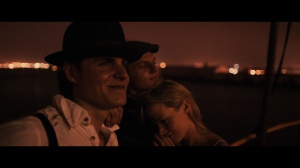 The film stars Nathan Grubbs and Marc Senter as brothers Charlie and Bobby Fontaine, respectively, two brothers who are brawlers in the underground riverboat fights taking place in New Orleans. Both boys are at the top of their game, but while Charlie just likes to fight, his younger brother Bobby gets into trouble with drugs and money with the mob that runs those illegal fights. Charlie is also newly married to Kat (James), a pretty but absent woman whom Charlie is devoted to. Before long Bobby’s problems with the mob get worse, and a group of thugs come to his home to teach him a lesson, and he promptly fights them off, and soon Charlie comes to the rescue, but Bobby is unable to save Charlie from a vicious baseball bat to the knee.  Charlie recovers, and two months later finds him working in a construction job while Bobby, who is hiding out from mob, lives with Charlie and Kat, but before long the drug-addled Kat and Bobby have sex, and are both caught by Charlie, who rages against them both, and challenges Bobby to a fight to the death on the riverboat, but are the bonds of brotherhood stronger than a mistake?

On the outside Brawler looks like it’s cut from the same cloth as the Never Back Down series, and nothing can be further from the truth. The fact that this is based on a true story lends it a certain credibility, and the story itself isn’t so much about the fight but the chain of events that lead up to the fight. Charlie is the more level-headed of the two, but perhaps suffers from not being able to see some people (Bobby and Kat) for who and what they really are, and tries to make life work for them all, but once the betrayal occurs Charlie’s world order is destroyed, while Bobby seemingly could care less. Both Grubbs and Senter do a good job as the feuding brothers, and Bryan Batt (Mad Men) is good as the gay high-roller friend of Bobby who doesn’t understand how much danger he’s really in. Pell James is also great as Kat, not really eliciting any sympathy, and that may be the point. Kat’s soul was crushed long before Charlie came into her life. In the end he was just the victim of Kat’s own self-destructive nature.

I had a few issues with the film from a technical level. Some of the night scenes, especially the indoor scenes, were entirely too dark. It was hard to see the actors at times. Some of the placement of shadows were good, but too many times it distracted from the story. There were also moments where the volume of the music overpowered the dialog being spoken. The music does deserve a special mention, as the blues and bluegrass music used was stellar. A fantastic display of music cuts into the film in the right moments. They need to make this soundtrack available! The use of New Orleans and Louisiana was well done, and the city really became a character of its own, adding to the mood of the proceedings.The worse things got for Charlie and Bobby, the worse the backdrop around them became, reflecting their world.

The fights were okay, and were decently shot, and most take place in the cage ring, and there isn’t a lot of complex movement, but the point is reality here, and it succeeds in that more than most films of this nature. The final fight is more a dramatic fight that a rah-rah one, and builds some suspense as to how far each brother is willing to go to win.

Brawler is a solid film that uses the backdrop of Louisiana to tell the story of two brothers and the betrayal that threatens both their lives. A well done drama.

NEXT: Yuen Biao and Brigette Lin lead an all star cast in Zu: Warriors from the Magic Mountain!