Women in martial arts films, particularly the early films, have always been a mixed bag. On one hand, especially in the Shaw Brothers films, the women can kick some serious ass. On the other, it seems that they still need the men to come and save them at the end. Of course there were exceptions to the rule, Angela Mao being one of them. But in 1985 two women broke into the scene and changed everything. Jackie Chan discovered Michelle Yeoh while working on a commercial together. Cynthia Rothrock was a martial arts champion, and had come to the attention of Sammo Hung. Corey Yuen, another one of the Seven Little Fortunes decided to put them both into his next film, and it would define both women for the next decade and advance women in action films forevermore…

The film opens as we meet resident ass-kicker Inspector Ng (Yeoh) who foils a robbery of an armored car, and flips and spins her way around shooting the living hell out of a bunch of dudes as if to announce “ the ladies are the badasses in this film, folks!” Afterward Ng announces she is heading for a vacation with a British gentleman, but her plans are canceled when her friend is, well, canceled by a hitman named Dick (Wei) who killed the man for Mr. Tin (Tien) a douchebag business man who needs to get a microfilm that shows his involvement in an illegal deal involving forged documents. Before Dick can get them two bumbling thieves Strepsil and Aspirin break into the room and steal the dead man’s passport, not realizing that the man was dead and the film was in the passport, and they take it to their partner Panadol (Hark). Ng is brought into the case, but must take on British Inspector Carrie Morris (Rothrock) as her partner. The three thieves slowly become aware that they are in over their heads as the police and the hitmen get closer to them both, and they try to avoid prison and death…

Yes, Madam will most certainly not be known for its acting, which I have to admit is not too good for the main leads, but this was pretty much the first film for both women, and in the end it won’t hurt the enjoyment of the film…much. What it does show is the onscreen presence of both Yeoh and Rothrock.

It is also refreshing to see that both female characters beat the tar out of everyone without needing to be “saved” by a man. They carried the action on their own, and take as much punishment as they doled out. The comedy and lightness of the film are carried admirably by John Sham , Hoi Mang, and Tsui Hark in a rare film appearance. After a time their bumbling around does test the patience of the audience, but the fights reward the patience later. Dick Wei is as good as always playing an utter douchebag and badass, which he excels at, and Fat Chung is as ridiculous as I’ve ever seen him, and it takes a special kind of over the top acting to distract you from his mustache, which I swear could be its own character in this film. James Tien doesn’t do much in this film except laugh…a lot. 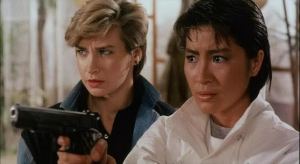 The fights throughout the film are good, but I did have some issue with the editing, which seemed scatter-shot between showing closeup shots and panoramic shots of the action. It seemed as if the editor didn’t really know how to edit the fights as Yuen had choreographed. The exception to this was the final fight, which lets everyone cut loose, and no one disappoints here. Cynthia shows why she came to Sammo’s attention, as her movements are crisp and can easily hang with the Corey Yuen style of fight choreography, and the same holds true for Michelle, which is amazing when you consider the fact that she knew no martial arts when she made this film. The fight between Cynthia and Dick Wei is particularly satisfying and the overall asskicking here is more than enough to satisfy any martial arts fan. The ending was a bit odd, but it doesn’t take anything away from the effort, and the two women it would propel to stardom.

CHOREOGRAPHY: (8) The overall choreography is good, and the final fight is fantastic as everyone is given a moment to shine, but some of the earlier fights aren’t as great as they could have been due to the editing.

STUNTWORK: (8) Not quite Jackie Chan crazy, but close as they guys took some nasty spills, especially in the last fight. That poor bastard Michelle Yeoh dropped from the 2nd level to the ground by the bar…yeowch.

STARPOWER: (9) Michelle Yeoh and Cynthia Rothrock’s stars would only rise after this, and Dick Wei is always good, as is James Tien and Sammo Hung in cameo rolls, and some of the Lucky Stars (Dennis Chan, Richard Ng) appear here as well.

FINAL GRADE: (8) A good small budget film that has some fun moments and good fight choreography, but gets the high mark for introducing Michelle Yeoh and Cynthia Rothrock to the world.