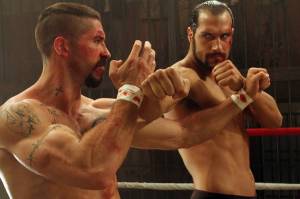 Undisputed 2 was one of those rare films that, even though it was a DTV film, was actually much better than the film it came from, and before you know it, the names Michael Jai White and Scott Adkins bounced to the forefront of DTV cinema. Both men have bided their time in smaller rolls, and this film announced that they were ready for bigger things. In the character of Yuri Boyka Scott Adkins created one of the best martial arts character in years. The question was whether or not Adkins could carry a film on his own.

The film picks up a few months after George Mason jacked up Boyka’s leg in Undisputed 2. Boyka has been disgraced ever since, and seems to be shadow of himself so much that even his former promoter Gaga (Ivanir) barely recognizes him. When it rains it pours for Boyka as he is turned down for parole and is told he can try again in 15 years. Boyka basically says to hell with this, and wants to enter a tournament where the winner is freed from prison. Boyka tears through Gaga’s new guy Psycho, and is sent to another prison where the fights will be held, and meets an assortment of people, including Turbo (Jenkins), an American boxer not unlike George Mason, with more attitude and cockiness. The big dog in the yard is a druggie nutjob named Raul Quinones, who is the reigning champion. Boyka must fight his way through various opponents, corrupt guards, and even the rules of the tournament itself in order to face Raul and win his freedom, or he will face his death. For Boyka it’s no problem because as he says:

“I am the most complete fighter in the world.”

Undisputed 3 once again is better than the film that came before it. Adkins does a great job as Boyka, a man who was a mysterious character in Undisputed 2, and remains so at the end of 3. They leave the speculations as to his character and why he was sent to prison in the first place in just the right places. Boyka isn’t an animal, nor is he a bad guy, which he really wasn’t in the previous film. He’s the same person here, and even shows that he does have a heart, and respects good fighters. Mykel Shannon Jenkins does a good job as Turbo. He has only one major fight, but he does well there. He exists in the plot to bring out the humanity that Boyka has, which isn’t much, but it’s there. Marko Zaror must have an affinity for playing kooks, as he plays another character who is a few french fries short of a happy meal just like his character in Kiltro, albeit much more deranged here, but to see Marko really cut loose in a way he hasn’t been able to so far…wow. No dude that big should be able to move like that. My favorite character in this series never fails to disappoint: Gaga. Yes, he’s a killer. Yes, he’s a bad guy, but damn it if he isn’t charming and funny at the same time. He always seems a step ahead of everyone else, and seems to know Boyka better than most. Mark Ivanir does a great job balancing Gaga’s funny side and his serious one, and yes, Gaga still loves his fast food, even though he has to live on carrots and celery now.

Isaac Florentine once again shows why he’s the top dog in DTV land when it comes to martial arts films. The camera placement and editing for the fight scenes are note-perfect, and he gets the most out of every fight, and even the slower scenes are directed well as he knows when to get out of the way and let the actors do their thing. Of course, none of this matters if the fights are good, and here is where the film truly shines. Larnell Stoval has become a very sought after fight choreographer, and after this film you’ll see why. The fights are really full of fast, complex movements that are really reminicent of late 80’s- early 90’s Sammo Hung films. The best fights are Adkins versus Lateef Crowder (can this guy ever win a fight against anyone of note in movies? Between this film, Tekken and Tony Jaa’s The Protector this dude seems to be the best fighter in the world to barely ever win a fight.) and the final fight between Adkins and Zaror, which is full of acrobatic WTF, and fantastic moves for each man. Stoval has the fight “conversation”of mid-80’s Honk Kong films down and it all looks both fast and pretty, and damn brutal.

Undisputed 3 is without a doubt a fantastic martial arts film, and Florentine and Adkins keep trucking along. Sooner or later Hollywood is going to figure out what these gentlemen truly have to offer. Whether they do or not, martial arts fans know exactly what we have in them. When it comes to English language martial arts films, they’re the top dogs. Just like Yuri Boyka.

CHOREOGRAPHY: (9) What a great way for Larnell Stoval to introduce himself to the world with. The fights have some MMA movements (not unlike what Donnie Yen has been working with in his modern-day films) but have some spectacular acrobatics and long sections of continuous fighting. The edits are perfect.

STUNTWORK: (8) Everyone does a great job, spinning and tossing themselves left and right. Nothing crazy, but some of these hits you KNOW these guys took were great. Reactions to hits are an art form unto themselves, and they it well here.

STAR POWER: (9) Scott Adkins’ star is climbing, and I think Marko Zaror’s not far behind him. Lateef does his normal awesome stuff.

FINAL GRADE: (9) Someone finally supplanted Bloodsport as the best tournament martial arts film ever made. Adkins’ Boyka is a fantastic character, but the real star here is Larnell Stoval and his fight choreography.

NEXT: Johnny Nguyen and Veronica Ngo are out to kick ass in Clash!