Choy Lay Fut (also spelled Choy Lee Fut and Choy Li Fut) is a southern style of kung fu that emphasizes long range striking along with continuous and powerful hand techniques and fluid footwork. There have been very few films made about the form, and since it is the style I am a practitioner of, I was pleased as punch when I heard they were finally making a serious film about it. After seeing the film I must say…

…I’m still waiting for that film, ‘cause this ain’t it.

The film stars Sammy Hung as Jie Chen, a young man who live in the UK along with his Japanese best friend Ken Takeda (Kosugi). Both young men are living day to day in England with no real direction, but Jie gets a visit from his father Wai-Yip (Sammo) who is traveling the world bringing Choy Lee Fut to wherever he goes. After a long talk Jie decides to return home, and brings Ken with him, since Ken wants to study Choy Lee Fut. No sooner do they return to the family school than they find trouble when the current teacher, Wai-Yip’s brother Tin-Cheuk (Wah), a teacher and major pothead is being harassed by a local Choy Lay Fut corporation, Pan-American International,  to buy out the school, which has been given permission to buy the school from Jie’s father.  Jie talks their representative, Xia, into a duel between the two organizations, with 3 million dollars and ownership of the school itself in the balance. Things get complicated when Jie falls in love with Xia, and she may or may not feel the same way, but Jie, Ken, and senior teacher Si-Hai Ren find that they will have to train harder than they ever have before using traditional techniques versus the modern equipment and training used by the three fighters they will have to face… 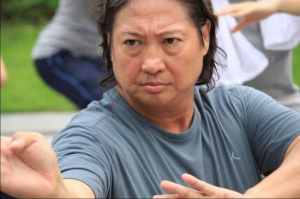 If this film is about Choy Lay Fut, then except for a few scenes and moments it’s more about Jie trying to cultivate a silly relationship with Xia that could have been left on the cutting room floor, but takes up the majority of the film’s running time. The few moments that actually have to do with their training are okay, the best being the training sequence with the three masters, one of whom is Shaw Brothers star Lar Kar Wing as a Hung Gar master. Even this isn’t very well done, leaving us with a brief montage of their training with these masters, which really should have taken up a far larger part of the film. At least the music was cool in this scene. The only real fights come at the end of the film during the tournament, but these are horribly edited, and the best fight involves Kane Kosugi and Ian Powers, but even that is compromised in post-production. If the fight choreography is good, I sure as hell couldn’t tell as they went MTV crazy with the editing. Also, a fight between Yuen Wah and Sammo Hung takes place on a mountain with obvious green screens being the background for the fight. So they couldn’t find one damn real mountain in China to film on? Really?

Sammy Hung is okay, but has a looooong way to go before he’s anywhere near as good as his father. Kane, on the other hand, is every bit as good as you would expect, and is a better actor than Sammy. Both boys are still young, and can forge their own path in martial arts cinema, but they’ll need to get away from films like this. The script itself is terrible and only Yuen Wah’s fun character keeps things from going completely bad. 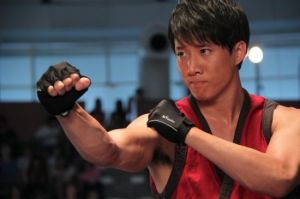 If you are looking for a film about Choy Lay Fut, you won’t find it here. Nothing about the form is explained, and it ends up being a film that has no heart, no character, and not much in the way of fighting, which is the cardinal sin here. Probably the most disappointing film of the year for me so far. It does have really cool soundtrack, however. If only more care had been placed into the film itself.

CHOREOGRAPHY: (4) Of all of Sammo’s films, this one has to be the worst. It’s hard to say who the real culprit is, Sammo himself or the editing, but both combine to make a really weak effort.

STUNTWORK: (2) Yeah. You won’t find much fighting here, so what do the stuntmen have to do?

STAR POWER: (7) Sammo Hung, Yuen Wah, Kane Kosugi, Lar Kar Wing should have been able to elevate this film. They couldn’t, and that should tell you all you need to know. Sammy was okay, but just barely.

FINAL GRADE: (3) This is a terrible film, more so if you are a martial arts film fan, and perhaps even more if you are a Choy Lay Fut practitioner. This may very well be Sammo and Yuen Wah’s worst film.