For years Hong Kong has ruled the martial arts movie roost, until the 2000’s, where many HK films were getting stale with the same old stories and actors now dancing around on wires. Luckily for us, other countries started to find their own voice in the martial arts film world, and now South Korea checks in with Fighter in the Wind, and with this film cemented their place in the new martial arts film regime. So how good is it?

The film begins as we find Choi Baedal (Yang) boxing in Korea when a Japanese plane flies overhead dropping flyers asking for any Korean who wanted to learn how to fly a fighter plane to come to Japan, where they will be trained and then asked to fight. Baedal welcomes this, and steals himself to Japan, where he meets Chunbae, a Korean street hustler who is being chased by a group of thugs who want their money back. They both hide in a Japanese cargo truck headed for the Aviation school, but find out that with the war ending, Japan wants its pilots to go on kamikaze runs. They refuse to fly, and are tied to posts during an American raid, and it is here that Baedal comes face to face with General Kato (Kato), a ruthless man who considers himself to be the best fighter in Japan. He makes a wager with Baedal: defeat him in a fight and he’ll let them go, lose and only Baedal would die, but it would be a horrible death. Baedal agrees, and is quickly beaten by Kato, but Baedal is able to do what no one has done, which was to actually land a blow on Kato. Amazed at this, Kato takes a sword, and as Baedal turns around slashes him with it.  This makes Kato believe that Baedal is a coward unworthy of the Japanese, and in the chaos both men are separated.

We pick up the story soon afterward, and Baedal and Chunbae operate a patchinko machine in Ikebukuro, and both men run afoul of the local Yakuza, whom are able to beat Baedel and embarrass him in a really crappy way that I’ll leave you to see. Chunbae and Baedel are saved by Bum-Soo (Jung) who was Baedal’s former Tae Kwon Do teacher when he was a boy. Baedel wants to learn martial arts from Bum Soo, who gives him a copy of Miyamoto Mushashi’s The Book of the Five Rings. During this time Baedel begins a friendship after saving one of the local geisha girls, Yoko (Hirayama), but it is not to last as a series of tragic events send Baedal into the mountains, where he undergoes a severe training regiment while reading the book Bum-Soo gave him. Months, if not years later Baedal turns up at various Japanese dojos and challenges their students to duel, and makes a name for himself first in Japan, and then the world. Kato, now the head of the Martial Arts Federation, tries to steer Baedel into a final confrontation, but there is one great fear Baedal has to get over first…

Fighter in the Wind is a terrific film about the creation of Kyokushin Karate. While there are not really any fantastically choreographed fights until the end, there doesn’t need to be. This is about one man’s journey from being brave but not having the ability to realizing everything he is capable of.  Dong-Kun Yang is terrific as Baedal, and makes his transformation from being a simple guy who wants to do good to being one of the toughest men to ever walk planet Earth believable. Masaya Kato is also great as Kato, a  proud man who is trying to understand exactly what Baedal is. While it may be easy to see Baedal as a human pincushion (I’ve never seen a hero get stabbed with a sword or knife so many times in a single film.) he’s the great enigma Kato is trying to unravel. The main theme of the film is celebrating the Japanese samurai spirit as embodied by a foreigner, much to the chagrin of the Japanese martial world. To the rest of Japan Baedal is a hero. 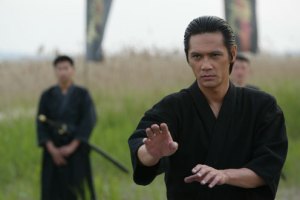 In regards to the fights, let me clarify a bit more. The fights are edited quickly, not quite MTV style, but close, but somehow it works here. The choreography isn’t meant to ape the Hong Kong style of fighting, settling for a more direct and brutal series of movements, which fits the Japanese fighting style, three moves and the fight’s over, which is closer to how it would go in the real world. The best fights are done through a series of montages that are really well done and showcase many different Japanese styles, like Judo, Ninjitsu, Karate, Jujitsu, and Kendo. The film is also beautiful to look at. Yun-ho Yang has a lot of really good shots and stages his fights against some truly beautiful scenery, and it isn’t hurt too much by the quick cut edits of most of the fights, which still complements the movements, and had me totally invested in each fight.

Fighter in the Wind is a terrific film showcasing the creation of Kyokushin Karate, and a look at Japanese culture and one man’s attempt to understand and harness the samurai’s fighting spirit. This is one worth the time to check out.

CHOREOGRAPHY: (8) The fights are not very long, nor do they have to be. Jung does a great job of understanding the speed and the power of kicks and punches of the different karate forms.The quick-cut edits actually find a way to work in tis film.

STUNTWORK: (8) The stunts are really well done, particularly toward the end. The stuntmen really allowed themselves to be thrown around quite a lot, and their reactions to punches and kicks were more believable than in many karate films.

STAR POWER: (8) Masaya Kato is always good to see as a villain, and Dong-Kun Yang is great, but it seems that the career of Doo-Hong Jung in front of the camera is really taking off after this film.

FINAL GRADE: (9) A really good film about a popular karate form that features good acting and a great story. There are few fights, but this film is about the philosophy behind the form itself, and that makes this a martial arts film that’s well worth your time.