The last few years has seen a rush of successful martial arts films from countries not named China or Japan, and names like Tony Jaa, Jeeja Yanin, and Johnny Nguyen have jump to the top of martial arts films. Now a new name from a country not known for martial arts films is here to take his place among them. So how does newcomer Iko Uwais do for for his first time out?

The merantau is a journey that young men in Indonesia take that is a rite of adulthood. It is a a journey of self-realization and finding out their place in the world. The film is about a young man named Yuda (Uwais) whose time has come to go on merantau. The film spends some time with Yuda’s mother and older brother, who has already had his merantau. Yuda has dreams of going to Jakarta and teach his form of Silat harimou in a school of his own. After he leaves home he meets Eric (Ruhian), a fellow traveller who warns Yuda to let go of his dreams, as the world is a much darker and dangerous place. Eric’s words become true as Yuda tries to intervene when a dancer named Astrid (Jessica) is about to be beaten by her boss Johni (Abbad). Yuda’s heroic act is met with hostility by Astrid and her little brother, and Yuda begins to understand that the world is far more complicated than it ever was in his village. Johni needs Astrid to be one of his “girls” for Ratger and Luc, two wealthy but dysfunctional European brothers who are there on business and want a good time. 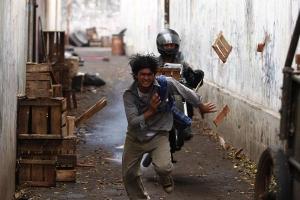 Johni forces Astrid to go to them, but damn his shitty luck that Yuda sees this, and gives him and his men a grand beatdown, taking Astrid from them and injuring Ratger’s face. These men may not have been aware that Yuda was a Country Bumpkin (you’ve heard this in many of my reviews. These dudes are all badasses.)This affront Ratger cannot take, and has Johni hire men to hunt down Yuda and Astrid, leading to a ton of fights before a fantastic finale on a warehouse pier as Yuda faces off with both Ratger (Koudal) and Luc (Busson) for a final showdown.

Merantau is a confident film to feature such a newcomer, much like Ong Bak was for Tony Jaa. Iko Uwais turns out to be a decent actor, not having a lot of emotion to convey, but what is there he does well. His style of Silat Harimou, which features many low tiger stances and movements, are well done here, but at first the fight choreography isn’t that different from films like Ong Bak, at least not at first. As the film progresses you really begin to see the style of Silat come to the fore. Toward the end there are three standout fights. The first is Yuda against his friend Eric in an elevator, which is a fantastic showcase of silat from two fighters who are well versed in the style. The cramped elevator makes the fight even more intense as you know one mistake and Yuda is dead.  The second is a great fight where half of Indonesia attacks Yuda, and he battles them on the top of a series of shipping containers, and really jacks them up Police Story style,  and the final fight is against both Ratger and Luc. I was greatly impressed by this, as the film doesn’t hint that either brother knows martial arts, and the quiet Luc was especially excellent as the super-kicker of the two. Laurent and Mads did an excellent job here. Can we get more Laurent Buson in a film, please? This guy has done a bunch of short films, and this is his biggest film yet. He reminds me of all the super-kickers who used to take on Jackie Chan back in his 80s’ films. More of him, please! 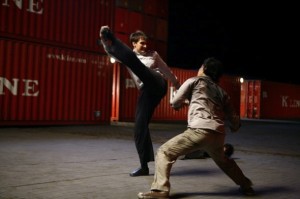 Merantau is a great first entry for a new talent like Iko Uwais, and just like Tony Jaa the sky’s the limit for him. A good film with great fights and a good story that shows that hope can come from the most unlikely of places. And that Country boys are not to be jacked with!

CHOREOGRAPHY: (9) The early parts of the film are nothing that hasn’t been seen in a Tony Jaa film, but toward the end they pull out the stops. The elevator fight is a stunning fight scene that really brings home the style of Silat, and the final fight between Uwais and Buson and Koudal is a showstopping fight that is beautiful and brutal all at once.

STUNTWORK: (9) These guys are as insane as Tony Jaa and Jackie Chan’s guys. The scene where the stuntman jump from one building to another only to meet a pole halfway deserves and award, and the fight on the shipping containers will make you wince. Well done.

STAR POWER: (8) Iko Uwais has the talent to go far, but his movie choices will ultimately decide how big he becomes. Buson is a great talent that needs to be a featured baddie more often. You listening Tony Jaa?

FINAL GRADE: (9) Not a perfect film, but a very, very good martial arts film that showcases a style new to film and a new star as well. We should all be looking forward to what Uwais comes up with next.