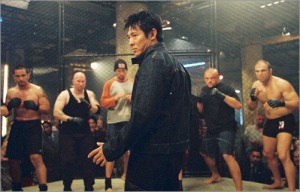 Jet’s American follow-up to Romeo Must Die reteams him with director Andrej Bartkowiak and gives him a partner with DMX, also just hot off of his team up with Steven Seagal in Exit Wounds. Can what followed be a better film than Romeo Must Die?

In a word, no. In two words, hell no. The film opens with an opening credit sequence that rips off of one of the only good things about Romeo Must Die. The film opens as DMX and his one of his posse mates take a lovely stroll through a subway tunnel on their way to steal some diamonds for some European fellow. Meanwhile, enter Jet, who has been tailing the European dude for unknown reasons. A really cool scene showing Jet’s stuntman scaling down a building, and then Jet rushes in and Seagals ™ the European guy.

Meanwhile we get treated to Anthony Anderson being somewhat funny as he tries to distract a gay security guard at the vault DMX is trying to get into. Of course, to this point we still don’t know what the HELL is going on except that diamonds are needing to be stolen. Jet then calls the police and then DMX to let him know that the police have been called…

Okay, I’m interrupting myself right here. To this point, 10-15 minutes into the film no one knows a damn thing about what’s going on. They don’t even bother to name names for at least the first 15-20 minutes before you pick up at least one person’s name, as if it isn’t important. And they’re right. It isn’t. Jet is being cool Jet. DMX is DMX. Anthony Anderson is Anthony Anderson, Mark Dacascos is-you get the picture. No one is really acting in this film, so you pretty much won’t care about what happens next, but I’ll clue you in anyway.

DMX and his team are trying to-and do-steal a black diamond that really isn’t a diamond, but uranium that can cause a nuclear explosion that can wipe out a city that was developed by China. Mark Dacascos and his henchmen Kelly Hu and Johnny Nguyen (yes, Johnny Nguyen from the Rebel and the Protector-everyone has to start somewhere, I guess) show up to steal the mineral and sell it to a group of the most powerful arms dealers.

To do so he kidnaps DMX’s daughter, so in turn DMX and his team enlist the help of a small time arms dealer played by Tom Arnold, whose 15 minutes of fame he cooked up by being good in Arnold Schwarzenegger’s True Lies had expired long before he made this film. He also teams up with Jet to find his daughter, after they team up to beat up some of Mark’s thugs. (Johnny Nguyen gets his ass kicked by DMX? WTF??! It should have been an epic fight between him and Jet, but this film dropped the ball, as it constantly does.

After a completely implausible car chase intercut with Jet beating down a bunch of MMA dudes (a guilty pleasure, I admit) they find out where DMX’s daughter is and the Uranium, and the entire group go to face Mark and his crew for a fight to the end, or sequel, or whatever. There isn’t enough that could have been done to mess this film up any more unless they burn all the prints. This was nothing more than an 82 minute DMX music video that happened to guest star Li and Dacascos. Thankfully Jet won’t make another film with this group…

CHOREOGRAPHY: (3) Once again, Corey slums it, but I don’t think that is his fault. Bartkowiak is a horrid director who has hopefully gone back to making music videos. You have a Johnny Nguyen and Mark Dacascos and Kelly Hu and you can only come up with quick-edited fights like that? Really? Not even the beatdown of the MMA guys, wires and all-can save this dreck.

STUNTS: (3) Barely passable wirework. Jet barely had anything to do. Why was Johnny Nguyen even there?

FINAL GRADE: (3) Jet just kinda showed up for this one. Folks, this film was made to sell the soundtrack more than make a cool martial arts film. I’ll just say it, one of the worst ever. Please Jet, never work with them again. Avoid this film at all costs.